Fleet and business new car registrations declined by 96.3% in April, according to new sales data published today the Society of Motor Manufacturers and Traders (SMMT).

There were 3,450 new cars registered to fleet and business – an all-time low but still represented four out of five cars (79.8%) registered last month.

The SMMT says the decline is in line with similar falls across Europe, with France 88.8% down and the Italian market falling 97.5% in April.

As a result, it has downgraded previous expectations to just 1.68 million registrations. This puts the sector on course to record its worst performance since 1992’s 1.59 million units, below the levels seen during the financial crisis and some 27% lower than the 2.31 million new cars registered in 2019.

Mike Hawes, SMMT chief executive, said: “With the UK’s showrooms closed for the whole of April, the market’s worst performance in living memory is hardly surprising.

“These figures, however, still make for exceptionally grim reading, not least for the hundreds of thousands of people whose livelihoods depend on the sector.

“A strong new car market supports a healthy economy and as Britain starts to plan for recovery, we need car retail to be in the vanguard. Safely restarting this most critical sector and revitalising what will, inevitably, be subdued demand will be key to unlocking manufacturing and accelerating the UK’s economic regeneration.”

The distortion caused by coronavirus was reflected across all segments and fuel types, with the numbers of new petrol and diesel cars joining UK roads down 98.5% and 97.6% respectively, as plug-in hybrid vehicles (PHEVs) declined 95.1% and hybrids (HEVs) 99.3%.

Meanwhile, the niche battery electric vehicles sector saw a smaller percentage decrease of 9.7%, as some pre-ordered deliveries of the latest premium models were able to be fulfilled.

Andrew Burn, partner and head of automotive at KPMG, said it was “no surprise” that car sales in the UK have plummeted.

“In some ways the sales drop would appear on the face of it to actually be more pronounced than the European results we saw in March suggested,” he said.

“Again, it’s unsurprising that the majority of sales were fleet as pre-Covid-19 orders were fulfilled. I expect this will most likely drop dramatically as many companies will probably have cancelled orders as part of their rapid cost reduction/cash preservation actions as the country went into lockdown.

“The key questions that cannot be determined currently are what the level of post-lockdown sales will be and whether we will see consumers move away from public transport to cars when lockdown ends but social distancing continues - particularly if it continues for up to a year.

“We are already seeing indications of significant price discounting in the sector over the last few weeks to stimulate some sales, but with a significant proportion of the working population in the UK being furloughed, this is likely to drive low consumer confidence and low car sales.”

Michael Woodward, UK automotive lead, Deloitte, added: “Whilst UK lockdown restrictions are yet to be eased, when they are this could spark a recovery in sales.

The Finance and Leasing Association told Fleet News that the SMMT’s figures show the stark reality of lockdown not just for motor manufacturing, but also for the associated sectors that work alongside it.

Stephen Haddrill, director general of the FLA, explained: “FLA members have been providing unprecedented levels of support to customers whose income has been disrupted, but the cost of doing so is causing severe strain on firms as new lending in this market has been affected by the closure of dealerships.

"Our figures for March, to be released later this week, will show that consumer motor finance new business volumes fell by 27%.

“Government help is needed to ensure that the non-bank lenders in this sector have access to funding so they can continue to support customers, but also begin lending again as we emerge from lockdown.” 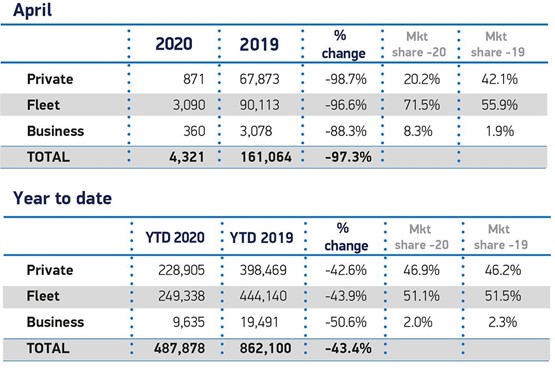 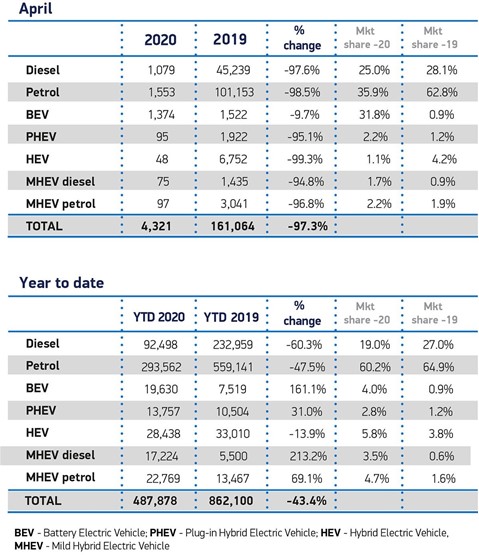 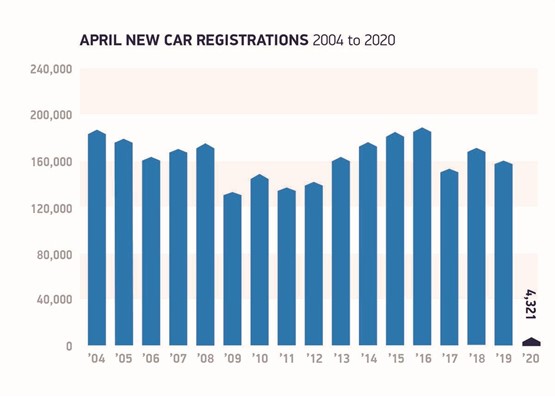 FleetCheck says there is a “strong argument” for fleets to continue car and van MOT tests to ensure safety.

Cap HPI has introduced a package of specialist services to help fleet and finance companies through the Covid-19 pandemic.