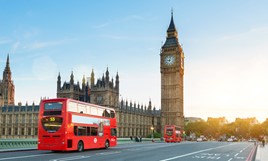 Business travellers and commuters continue to steer clear of public transport, preferring to drive rather than travel by bus or train, new data from Transport Focus shows.

Before the outbreak, 43% nationally used public transport at least a few times a month, while 80% used the car.

But just 2% of respondents said they had used a bus in the past week, which has remained unchanged since Transport Focus began its weekly survey.

In terms of trains and the London Underground, usage has again remained unchanged over the period, with only 1% of respondents saying they had travelled on either.

More than a third (36%) of respondents said they were avoiding public transport on Government advice, unchanged from the previous week.

Two out of five respondents (39%) said they would not use public transport for any reason until they felt completely safe.

However, almost one in eight said they would begin using public transport again when shops were open again or when their employer asked them to return to work.

During the first few weeks of the pandemic, there was much debate about the use of face masks.

Last month, the Government updated its advice and for the first time recommended their use in when in an enclosed space where social distancing is not possible.

Examples given include short periods indoors in crowded areas, such as when using public transport or visiting some shops.

Six out of ten respondents (62%) said think that wearing a face mask while using public transport should be a requirement in the most recent study. That was similar to the previous week’s result (63%) but has increased from the 51% seen in week one of the survey.

Until social distancing can be guaranteed on public transport, however, 71% said they would continue to avoid its use.

A consistent six out of 10 (60%) said they will more likely to drive in the future.

Driving retained its top spot, with 53% reporting usage of their car, unchanged from the previous week and a 5% increase on the 48% from a fortnight ago.

Drivers, however, are continuing to report an increase in the volume of traffic they are encountering, with 38% of respondents saying roads are ‘moderately’ busier in the past week – up from 33% in the previous week.

Traffic on the motorway, they say, is very light but local roads are much busier than they were a couple of weeks ago.

As lockdown restrictions are gradually lifted more businesses are re-opening and staff are returning to work. However, the proportion of people who say they expect to work from home more often in the future has increased since the survey was first conducted.

In week one, 40% said they expected to be spending more time working from home, compared to more than half (52%) of respondents now.

A Fleet News poll currently shows that two-thirds of respondents (66%) expect working from home to be their ‘new normal’ in the future.

Read how city transport systems are being re-imagined for life after lockdown in the latest edition of Fleet News.

A reliance on the multi-use of assets by mobility solutions threatens their adoption by fleets concerned about curtailing the spread of Covid-19, says FleetCheck.