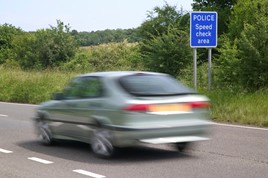 The Met Police has reported a 71% increase in drivers caught speeding in London during lockdown, while other forces saw a decrease in offences, new figures suggest.

The BBC reports that, according to a Freedom of Information (FOI) request submitted by the PA news agency, the Met Police issued 3,282 Traffic Offence Reports to drivers suspected of exceeding the limit in April, compared with 1,922 in April 2019.

Speeding data obtained from other forces also showed areas reporting an increase in the number of drivers caught for speeding. Kent Police and Derbyshire Constabulary reported year-on-year rises, up 53% and 41% respectively.

Fleet News has reported how police forces across the UK have caught drivers speeding during the lockdown, with one driver breaking the legal limit by 81mph and another clocked doing 108mph in a 40mph zone.

However, the majority of forces who provided data to the most recent FOI request recorded an overall decrease, amid a reduction in traffic levels of around two-thirds as the lockdown was in full effect.

It showed that 13 forces did see an increase in the speed of the fastest drivers caught, including in Dyfed-Powys, North Yorkshire, Police Scotland and West Mercia.

Derbyshire’s fastest offender was clocked at 108mph, but that was on a stretch of the M1 with a 40mph limit - 68mph above the speed limit.

Det Supt Andy Cox of the Metropolitan Police told the BBC that many drivers caught speeding during the early weeks of lockdown did not expect officers to be patrolling near-deserted roads.

"Early on, for some people driving at extreme speeds, they would be really surprised to see us there," he said. "They would actually come out and say 'we thought you'd be busy dealing with Covid'.

"Maybe some people advantage because congestion was less and thought they'd get away with it."

Licence Bureau says that the current reduction in traffic volumes, the incidents of speeding reported by police, and reduced driving activity for many employees combined with mounting economic business pressures, is creating a ‘perfect storm’ fleets need to pay special attention to.

Steve Pinchen, sales director at Licence Bureau, explained: “There is so much at play right now, but businesses really must ensure they do not drop the ball when it comes to legal compliance.

“Business driver road safety and duty of care, arguably more so now than ever, need to be at the top of the priority list for fleet operators.”

With employees returning from furlough, some of whom may not have driven for months, Pinchen argues that organisations have got to take a “pragmatic approach” by providing support and creating responsible cultures from individual drivers to senior management level.

The laws surrounding ‘driving for work’ include, amongst others, Corporate Manslaughter and Corporate Homicide Act 2007; Health and Safety at Work Act 1974; and Road Trafﬁc Act 1988 & 1991.

Renown Consultants was ordered to pay £750,000 in fines and costs last month, after being found guilty of serious health and safety failings.

In the June digital edition of Fleet News, experts speculate police may have feared failure had they charged Renown Consultants with corporate manslaughter.

Pinchen said: “Legal compliance; health and safety; duty of care – they are all part of an organisation’s responsibilities.

“At any given moment, a business needs to be able to demonstrate that it has done everything reasonably possible to reduce risks.

“Even in the ‘new norm’ these laws remain unchanged and all organisations need to have a sharp focus on the task at hand as everyone starts to re-find their feet.”

Business drivers are among those flouting speed limits, with new data showing an increase in incidents despite a reduction in miles driven.