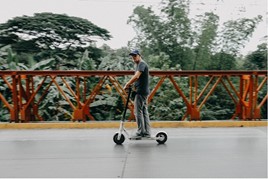 Milton Keynes Council and Lime have announced a partnership to launch a full-scale e-scooter trial in the city.

The scheme, which is expected to go live next month, will see Lime launch an initial fleet of 250 e-scooters alongside its current e-bike service in Milton Keynes.

Tees Valley Combined Authority was named as the first local authority to host an e-scooter rental trial at the begiining of the month.

In Milton Keynes, Lime was selected to run the first ‘on-street’ phase of its e-scooter service following a competitive process with more than 10 e-scooter providers vying to launch in the city. It is expected the trial will run for a period of 12 months.

Lime has committed to providing a fleet of up to 500 of its e-scooters for rental in the city based on expected demand.

Cllr Peter Marland, leader of Milton Keynes Council, said: “This will provide an important new travel option to residents and visitors to Milton Keynes and we look forward to working with Lime to study the results from the trial.”

Micromobility could be set to transform the way commuters and business travellers get around towns and cities, but Go GoCompare Car Insurance is warning that privately-owned e-scooters remain illegal on public roads, cycle paths and pavements and drivers face a £300 fine and six points on their licence, if caught.

According to Google Trends data, since the start of lockdown there has been a surge in interest in electric scooters – with a 376% increase in searches. E-Scooters are freely available to buy in the UK but can only be ridden on private land with the permission of the landowner.

The Government launched its legal trials of rented electric scooters on public roads, cycle paths and lanes this month, as part of its review of transport following the easing of lockdown.

Lee Griffin, founder and CEO of GoCompare Car Insurance, said: “Privately-owned e-scooters are currently banned from use on the public highway but, this doesn’t seem to be deterring people from using them.

“We’re concerned that following Government advice to avoid public transport because of the pandemic, more people will buy an e-scooter to use for short journeys, without perhaps realising that they can only use them on private land.

“There’s also the potential for people to be confused by the Government’s rental trials into thinking that privately-owned electric scooters are now road-legal, when this isn’t the case.”

Unlike electric bicycles, e-scooters are classified as Personal Light Electric Vehicles and are subject to the same legal requirements as motor vehicles – including technical safety standards, road tax, and insurance. Private electric scooters currently on the market don’t meet these requirements so, can’t be used legally on the road.

“The consequences for drivers caught flouting e-scooter rules can be costly,” continued Griffin. “As well as receiving an on-the-spot fine, drivers face having six penalty pointed added to their licence.”

Read more about e-scooter trails and some of the businesses involved in the July digital edition of Fleet News.

Nine in 10 say the Government’s proposed rules for e-scooters are unsafe, according to a survey from Venson Automotive Solutions.

First e-scooter trials to start from this weekend

Tees Valley Combined Authority will host the first e-scooter trials, while new Government guidance for users has been published today.