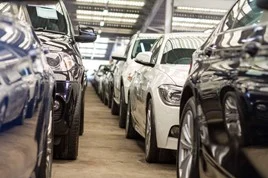 Used car values dipped by 2.1% in October – the first fall since March – and look set to fall further, while wholesale sold prices fell across the board, according to new data from at Cap HPI.

It says that there has been a drop off in trade demand, with buyers becoming more reluctant to pay high prices for used stock.

“The market appears to now be undergoing some realignment,” explained Derren Martin, head of valuations UK at Cap HPI.

“There are several factors at play. Values do tend to drop in the final quarter of the year, by varying degrees, as demand drops away in the run-up to Christmas and supply levels usually increase.

“We do appear to be experiencing that drop off in trade demand, but it is exacerbated this year by economic uncertainty, high prices and reasonable predictions that the consumer appetite for used cars that has driven up prices cannot last forever.”

Both city cars and superminis have seen the most increases over the last few months but experienced above-average falls in October.

City cars reduced by an average of 2.9% (£150) at the three-year point, with larger drops for the Citroen C1, Skoda Citigo, Vauxhall Viva and Volkswagen Up.

Superminis reduced by 2.5% (£200) in October, with some of the most heavily affected at the three-year age being the Ford Fiesta, Hyundai i20 and Kia Rio.

Younger used cars were less affected by a pricing move, with franchise dealers switching customers from new to used when availability was an issue.

All other mainstream sectors experienced a downturn in values, with lower medium (C-sector) cars, the next most heavily affected.

SUVs, although still dropping in price, have held up slightly better than most, despite being almost one-third of wholesale volume now.

Large SUV models have performed the best in terms of price, moving down in value overall by just 0.5% (£150) at three-years-old.

Volumes seem to have been steady, and manufacturers have continued to steer these vehicles back into their dealer network whenever they can, particularly if volumes are low, says Cap HPI.

The supply of electric vehicles being offered in the used wholesale market continues to grow; year-to-date disposal volumes have increased by around 20% over the same period last year.

While there is no doubt that there is a demand for used EVs, Cap HPI says that an increase in supply and the premium they attract over a petrol or diesel vehicle still acts as a barrier to the mass market.

Martin concluded: “2020 has been completely different from any other year in history and that includes what has happened to values of used cars, rising against all expectations.

“It is particularly difficult to predict what may happen, with so much uncertainty due to localised lockdowns – whether or not car retailers can sell and deliver cars in Wales remains a grey area at the time of writing.

“Whilst trade volumes are not as high as in previous years due to lower than normal registration volumes, and leased vehicles are still on extensions, plus new car supply issues, it is still highly unlikely that demand for wholesale stock will overtake supply for the remainder of the year.

“As a result, with values remaining higher than they were a year ago, by over five per cent on average despite the recent Live drops, we are forecasting that values will continue to drop in November.”

BCA is reporting that for the fourth consecutive month average used car values remained above £8,000, with sold volumes also rising.

A degree of stability seems to be returning to the UK used car auction market, finds forecast editor at Glass's, Robert Redman.