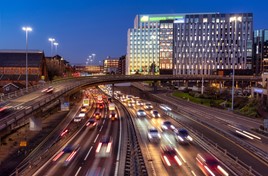 The Scottish Road Safety Framework has been published, which includes targeted action to reduce the number of accidents while driving for work.

Latest official data shows that 165 people were killed on Scotland’s roads in 2019, a reduction of 43%, while 2,016 people were seriously injured.

Health and Safety Executive (HSE) figures suggest that in 2018-19, driving accounted for 18 of the 29 work-related deaths in Scotland, making driving the most dangerous work activity.

The framework says that it must “strive for a future where no one is killed while driving/riding for work”.

It also says that the high number of fatalities, poses a risk to every road user, even more so with the increase in Light Goods Vehicles (LGVs) on our roads and the growth of the grey fleet.

A variety of respected organisations, such as HSE, the Royal Society for the Prevention of Accidents (RoSPA), and the Transport Research Laboratory (TRL), have consistently indicated between one quarter and one third of all collisions in the UK involve someone driving for work.

In Scotland in 2019, there were 7,671 reported road casualties, of which 1,171 occurred where the journey was work-related. These resulted in 10 pedestrian deaths, five in a car/taxi, three in a bus/coach, two in an HGV and one in an LGV, while 448 of those injured were travelling in a car/taxi, 276 were pedestrians 178 were in an Bus/coach and 142 in an LGV.

Transport Scotland has estimated that 1.1 million private vehicles are used for business on Scotland’s roads.

All workers are entitled to work in a safe environment where risks to their health and safety are properly controlled.

Employers have duties under health and safety legislation for on-the-road work activities, and this also extends to the self-employed.

This requires an adequate and suitable generic assessment of risks for the various types of driving tasks undertaken within every organisation, while employers must also consider the safety-critical features of: the journey purpose; the vehicle to be used; and the driver/rider him/herself; as these are equally important factors in collision risk, the framework says.

Central to the road safety vision for Scotland is the ‘Safe System’ approach with its five core pillars which include: Safe Road Use, Safe Vehicles, Safe Speeds, Safe Roads and Roadsides and Post-Crash Response.

IAM RoadSmart, a strong advocate of road safety targets, is using the Scottish announcement to urge the Department for Transport to reinstate targets in England.

Neil Greig, IAM RoadSmart director of policy and research, explained: “For every nation, the setting of road safety targets has been a catalyst for improvement in road deaths and injury numbers.

“Road safety organisations across the UK agree that targets work but the Department for Transport in London no longer use them. So today we have to ask the question, if Scotland can set road safety targets, why can’t England?”

Indeed, the unveiled Scottish Road Safety Framework sets a clear strategy for improvements while working alongside other government policies in environment, health and transport.

However, while welcoming the announcement, IAM RoadSmart has urged a word of caution. “It is vital that investment in road safety does not become a victim of any post pandemic spending cuts,” said Greig.

PACTS urges Government to change how it reports road deaths

PACTS is urging the Government to change the way it reports road deaths to show danger as well as vulnerability.

UK road deaths in the 12 months up to June 2020 are down 14% compared to the equivalent period in the preceding year, new data from the DfT shows.