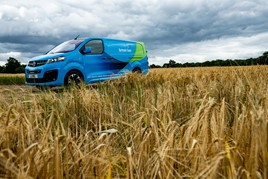 A plan to electrify all British Gas vehicles by 2025 is being helped by Hitachi Capital Vehicle Solutions’s (HCVS) decision to allow diesel vans to be terminated early at no extra cost.

Centrica, owner of British Gas, has committed to electrify its 12,000- strong operational fleet by 2025, five years earlier than originally planned, as part of its commitment to become a net zero organisation.

It has also committed to make its 1,500 company cars EV-only in the same time frame.

However, in order for the total cost of ownership (TCO) to remain competitive on diesel vehicles still joining the fleet, lease provider Hitachi Capital needed to be creative.

Jon Lawes, managing director of HCVS, told Fleet News that his firm’s role was to find the solutions to match British Gas’s ambition. “Normally, the most economic TCO for British Gas would be leasing a diesel vehicle for six years, but that doesn’t make sense if you’ve got a strategy and ambition to electrify your fleet by 2025.”

The issue for British Gas was how to make that TCO calculation stackup with a shorter cycle on diesel vehicles joining the fleet now, and potentially over the next couple of years, while an electric equivalent is not available.

In working out a solution for British Gas, Lawes explains that Hitachi Capital looked at the “components of the cost”.

Racking, which has been installed in diesel VW Crafter vans currently joining the fleet, will be re-used in the electric equivalent when it joins the fleet, effectively spreading the cost over two vehicles.

“We’ve also given them a shorter lease period, but with a window to be able to terminate the vehicle free of charge,” said Lawes.

“Effectively, we’ve got more skin in the game in terms of residual value risk to help them transfer to electrification.”

For small- and medium-sized vans, there are electric solutions available now where the TCO can work for a fleet operator.

However, for large panel vans, according to Lawes, while there are some good solutions to make the switch to electric, such as the Fiat e-Ducato and the Renault Master ZE, the TCO is not competitive enough right now for mass adoption.

Steve Winter, head of fleet at British Gas and a Fleet News Award winner, said: “Due to the lack of suitable large electric vans that currently work on our TCO model, we have taken the decision to lease through Hitachi a number of diesel VW Crafter vans on a short lease with the flexibility to transition to the e-Crafter when launched and recycle racking across the two vehicles.

“Although there are no fixed dates for the transition, VW’s roadmap for EVs matched ours and gave confidence in the plan and having Hitachi on board enabled the flexibility we were looking for.”

The e-Crafter was meant to be arriving in the UK in limited numbers throughout 2020 and 2021, but is now not expected to be launched as a fully electric vehicle until it receives a facelift, probably later this year. British Gas had originally planned to transition 10% of its commercial fleet to electric by 2017.

However, it missed that target, pushing it back to 2020, blaming shortcomings in the charging infrastructure and the technology available at the time.

Centrica later committed to electrify its fleet operations by 2030, by becoming a member of The Climate Group’s EV100 initiative alongside SSE and Mitie, before announcing the more ambitious target of 2025.

Transport secretary Grant Shapps said: “It’s encouraging to see that one of Britain’s best-known brands is leading the way with the largest commercial EV fleet in the UK.”

Hitachi’s funding arrangement with British Gas to help it make that switch to electrification faster is not unique, with other lease providers being similarly creative.

Volkswagen Financial Services Fleet, for example, launched a new offer for fleet and business customers that want to switch to a new VW ID3 electric car.

The leasing provider is offering to pay early termination fees for existing lease contracts, even if they are with another provider.

British Gas says it plans to never order another ICE vehicle again after signing a deal for a further 2,000 Vivaro-e electric vans from Vauxhall.