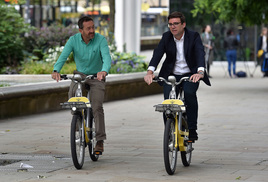 The region has secured £120 million in Government funding to help fleets upgrade to cleaner, compliant vehicles, with applications opening from November this year.

Van operators can now access up to £4,500 towards the replacement of a vehicle – £1,000 more than initially proposed – and Greater Manchester Hackney Cabs can get up to £10,000. HGVs can now get up to £12,000 towards replacement, nearly three times more than was initially offered, and coaches are now eligible for £32,000.

Greater Manchester-registered taxi/private hire owners and light goods vehicle (LGV) operators will also be given more time, money and options to upgrade, in light of feedback received following last year’s eight-week consultation on the plans and the impact of Covid-19, particularly on small businesses.

This includes temporary exemptions for an additional year (until May 31, 2023) for all hackney and private hire vehicles (PHV) licensed by a Greater Manchester district.

Mayor of Greater Manchester, Andy Burnham, said: “Greater Manchester were the pioneers of the industrial revolution, now we are leading a green revolution, backed with over £120 million that we’ve secured to hand over to businesses to support making their vehicles compliant.

“We listened hard to what business owners wanted and, as a result, taxi drivers are being given more time, more funding and more options.”

The 10 Greater Manchester councils are under direction from Government to introduce a category C charging CAZ – including commercial and passenger vehicles but not private cars – to secure compliance with nitrogen dioxide (NO2) legal limits on local roads in the shortest possible time, and by 2024 at the latest.

The £120m support package for Greater Manchester will help sole traders and the voluntary sector to upgrade non-compliant commercial vehicles and avoid a daily charge with the funding available from November. This includes:

Greater Manchester has also secured funding for over 30 taxi-only electric vehicle (EV) charging points at strategic sites across the city-region.

There are currently around 360 publicly accessible EV charging devices in Greater Manchester with around 700 connectors.

A new Electric Vehicle Charging Infrastructure Strategy, to be published in July, will set out plans so that by 2030 anyone chooses to travel by car or van will be able to confidently drive an EV knowing that they can recharge it quickly and conveniently across the region.

Following the clean air consultation, and taking feedback into account, the CAZ boundary has minimal changes and will cover the whole of Greater Manchester, excluding the strategic Road Network (SRN) which is managed by Highways England.

However, the Government has agreed to include sections of the A628/A57 on the SRN that pass through the villages of Hollingworth and Mottram in the zone. More information is available at cleanairgm.com.

The Mayor of Greater Manchester, Andy Burnham, has confirmed that Manchester’s clean air zone will not target cars.