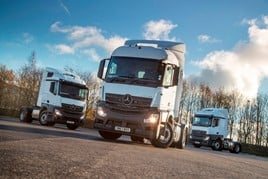 It involves roads policing officers driving an unmarked HGV cab which offers an elevated position allowing police officers to film risky behaviour, such as mobile phone use and seatbelt use, within passing vehicles

The plain white HGV tractor unit loaned to West Mercia Police by Highways England has been used across the country enabling officers to crack down on motorists who break the law, first taking to the road in 2018.

Superintendent Gareth Morgan of West Mercia Police said: “During this operation officers have witnessed a number of drivers not wearing seatbelts and using their phones behind the wheel.

“There have been various education campaigns highlighting these particular issues so there really is no excuse for people not to know what the law states or the penalties they can receive when they are caught.”

He continued: “This Operation is a great demonstration of joint partnership working with Highways England where the ultimate aim is to improve road safety for all and reduce the amount of people that are killed or seriously injured on our roads.”

Highways England assistant regional safety coordinator, Marie Biddulph, added: “We know that the majority of drivers who use our roads every day are sensible and safe behind the wheel but it is disappointing so see how many people are still putting themselves and others at risk by simply ignoring the law.

“Operation Tramline could not operate without our police partners and we are very grateful to West Mercia Police for helping us to tackle such dangerous driving on our roads.

“We hope that through our continuing partnership and use of the supercabs we can encourage all motorists to think about their driving behaviour.”

During the week-long operation in West Mercia, 85 offences were detected on the motorway, such as non-seatbelt use, mobile phone use and driving without due care.