Enterprise Rent-A-Car has highlighted that unmanaged business travel from drivers using their own, often older and higher-emission cars for business trips, is a challenge for employers across much of Europe.

Across the UK, France and Germany, 62% of grey fleet drivers don’t regularly conduct essential basic maintenance checks to ensure their cars are safe and legal to drive.

Furthermore, almost half (48%) of those that currently have a warning light showing on their dashboard do not plan to have it checked.

It is both a duty of care risk and an operational concern, as 32% of UK drivers and 28% of those in France and Germany admit that they have missed or were late to a business meeting because they were sorting out a vehicle repair.

This is potentially a major challenge for businesses that operate in more than one territory, and especially the growing number of multinational organisations where employees may now work from home in another country, at least on a temporary basis, says Enterprise.

Companies in more than one market may also need to ensure their travel policies reflect country-specific risks.

For example, more than half of UK grey fleet drivers (53%) admit that they don’t regularly conduct any basic vehicle maintenance checks themselves, but this rises to an even worse 61% of French business drivers and two-thirds (68%) of German drivers.

The research compared the behaviours of 2,466 employees in the UK, France and Germany, all of whom use their own personal car for business trips and claim mileage/kilometre reimbursement. It showed that in these three major European markets, businesses could be exposed to higher emissions and duty of care risks.

In addition, independent studies have shown that the average age of a grey fleet vehicle in the UK is 8.6 years, compared to 9.8 in Germany and 10.6 in France, suggesting the risks are even more pronounced in Europe as grey fleet cars there tend to be older.

The study revealed that the UK’s grey fleet drivers largely take better care of their vehicles than their counterparts in France or Germany – but significant health and safety risks remain in all three countries.

Only 7% of UK business drivers who use their own cars for work admit that their vehicle is only ever checked when it goes in for its annual MOT/service – but this rises to a deeply concerning one in five German motorists (19%) and 21% of those in France.

When it comes to carrying out many basic regular vehicle maintenance checks, either themselves or by others, at least a quarter of UK drivers have never done so – and they are still more conscientious than many of their European counterparts. 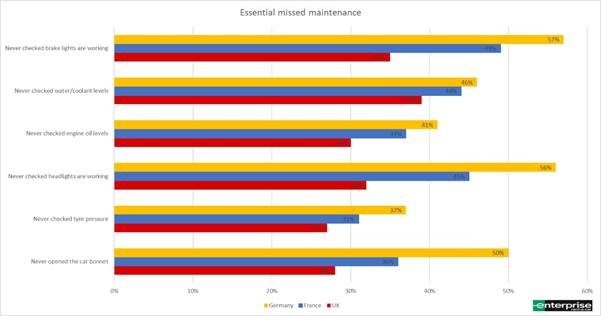 The research further revealed that UK grey fleet drivers are also the most likely to have a regularly checked and roadworthy spare tyre in their car, but still around half (49%) do not, compared to 53% in France and 60% in Germany.

Adrian Bewley, assistant vice president of business mobility for Europe at Enterprise, said: “Unmanaged business travel is a huge concern for businesses and the public sector across Europe, especially now that many employees work from home and often use their own cars for work because they see it as an easier option.

“The costs of mileage and kilometre reimbursement are rarely tracked and can lead to businesses spending tens of thousands of pounds and Euros on potentially unsafe business travel.

“The risks over driver health and safety and CO2 emissions can be even more pronounced as grey fleet cars tend to be older and more polluting and may lack the latest safety equipment. Again, many businesses have no way to track and control what vehicles their employees are driving for work.”

Bewley says it’s a particular challenge for multinational corporations with offices and employees in multiple countries.

“They need to be able to track how, when and where their people drive for work in different regions, and put all of them in safe, modern vehicles that can be easily managed,” he continued.

“Many businesses have already switched to alternatives such as automated car clubs or daily rental to alleviate these risks and costs. It’s vital to analyse how their employees are travelling so they can create more cost-effective and sustainable ways for them to do so.”

In order to ensure hygiene and safety, Enterprise introduced its Complete Clean Pledge in 2020 to further enhance how all its vehicles are thoroughly cleaned between each rental.

This includes washing, vacuuming, general wipe down, and sanitising with a disinfectant that meets leading health authority requirements, with particular attention to more than 20 high-touch points.

Enterprise Car Club vehicles are being used as part of a trial reduce transport emissions in the West Midlands by the University of Warwick.