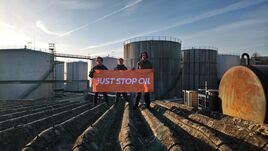 Fleets are being warned to expect further disruption at the pumps over the Easter weekend as fuel protesters vow to continue action impacting deliveries of petrol and diesel.

Environmental activists have been protesting at oil refineries around the country since the start of April, leading to fuel shortages at some forecourts.

Protesters from Just Stop Oil and Extinction Rebellion have been targeting oil depots around the country.

The Just Stop Oil coalition claims that the world will be “unviable” due to current Government policies to extract more oil and gas from the North Sea.

It continued: “We cannot be bystanders while people, communities and countries across the world are sentenced to death, because our Government refused to get a grip and stop oil.

“At this critical moment we find ourselves, as others have through history, having to do what is unpopular, to break the law to prevent a much greater harm taking place.”

It added: “The Government can end the queues and closures at petrol station forecourts immediately, ahead of the Easter holidays, by committing to halt all new oil licenses and consents.

“Ministers have a choice: they can arrest and imprison Just Stop Oil supporters or agree to no new oil and gas.

“While Just Stop Oil supporters have their liberty the disruption will continue.”

On Sunday (April 10) a group of Just Stop Oil supporters, stopped and climbed on top of two oil tankers, and succeeded in forcing two major oil terminals in Warwickshire to cease operations.

Further south, another group accessed the Inter Terminal in Essex bringing production to a halt. These were the latest in a series of actions at oil facilities around the country since the start of the month.

Up to 12 people have been locked on to pipework in the Inter Terminal and a number of people still occupying a tunnel under a major access route to the Kingsbury Oil terminal in Warwickshire.

More than 400 people, said the campaign group, have joined actions that have succeeded in stopping operations for up to 24 hours at a time at 11 critical oil terminals that supply fuel to hundreds of petrol stations across the Midlands and South of England.

As many as one in three petrol stations are being reported as shut in the South of England due to the disruption caused by the actions, says Just Stop the Oil.

Promblems with fuel supply, comes as airports and ferry terminals have also faced delays. The Liberal Democrats have called on the Prime Minister and transport secretary to host an emergency summit at Downing Street to solve the country’s travel chaos ahead of the Easter Weekend.

The emergency summit would include members of the travel industry such as representatives from airports, airlines, ferry operators, the highways agencies, Network Rail and the rail operators.

Liberal Democrat transport spokesperson Sarah Olney MP said: “It is now or never to prevent Britain from coming to a stand-still.

“Our airports are already scenes of chaos and drivers are being warned to only travel at night just to avoid gridlock. This is no way to run our country’s transport network.

“The Government needs to get a grip.

“They need to bring decision-makers together and give the travel industry all the resources necessary to ensure people can make sure their journeys are safe and timely.

“Those travelling are already furious at the lack of planning from the Government and there is now only a matter of days to fix the problem.”

The Petrol Retailers Association has criticised Transport Secretary, Grant Shapps, after he urged drivers to boycott petrol stations who refuse to cut prices.