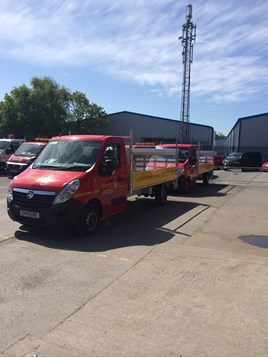 It has also launched a three-month maintenance management pilot, which it anticipates resulting in a fully-fledged contract.

In the last 18 months the size of its light commercial fleet has more than doubled to some 330 typically 3.5-tonne flatbed vehicles, but also including 20 HGVs and additionally 20 company cars.

The fleet and out-of-hours calls were previously managed in-house by general manager Terry Musson. However, he explained that the rapid expansion of the fleet as a consequence of business growth meant the company wanted to “plug into” the knowledge and expertise of an external provider.

Allied to the appointment of a third party management company has been the recruitment of Jay Lanchbury as Amberon’s transport manager.

Musson said: “Growth of the fleet meant managing it became a full-time role rather than one aspect of my role. Therefore, we have recruited a full-time fleet manager and are also now using the expertise of FSGB.”

FSGB, which officially launched in April this year, took over responsibility for the out-of-hours service after Amberon’s initial partner pulled out of offering the solution.

The out-of-hours service sees FSGB’s own call centre handle an average 150 calls a month between 6pm and 7am. On receiving a call in respect of both planned and unplanned emergency activity, staff direct the work to the nearest available duty engineers.

FSGB was launched by Marcus Bray, who with his father and stepmother was instrumental in the growth of Fleet Support Group from a kitchen table concept to a fleet management company managing 55,000 vehicles and drivers.

Musson said: “I was aware of FSG and knew the management team had huge fleet experience. When our incumbent supplier pulled out of providing the service I decided to give FSGB the work.

“FSGB is a new venture and our partnership is in its infancy, but the out-of-hours service provided is working very well.”

That success subsequently led to Amberon extending its business relationship with the maintenance management trial in place of its previous partner, the same supplier as for the out-of-hours service.

Musson explained: “We want our maintenance management partner to be pro-active and deliver value for money and we did not believe that was happening. Once again initial impressions are very good and we are looking for a long-term partnership with FSGB.”

Musson said: “The high mileage nature of our work means that maintenance management is critical and vehicle downtime must be very carefully managed as maximum uptime is essential.”

The majority of the vehicles are owned by Amberon - a handful are subject to lease arrangements - and all undergo remedial work through FSGB’s nationwide independent garage network.

Musson said: “Using the network means that there is a garage close to one of our depots and, if required, we can nominate a garage to use with which we have a particularly strong relationship.

“Having that flexibility is key as is the willingness of garages to undertake work to meet our requirements with consideration that vehicles operate round-the-clock.”

Due to high annual mileages and the stop-start nature of the driving, light commercial vehicles are serviced every 15,000 miles irrespective of manufacturer intervals. Additionally, regular vehicle inspections help to efficiently manage the replacement of wear and tear parts such as brake pads and discs.

Musson concluded: “FSGB’s operational management team has many years of experience. We are using their vehicle expertise and marketplace knowledge to further improve management of the fleet and we are confident that operating costs will reduce as a result.”