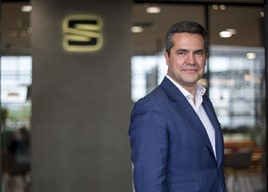 Seat has appointed Lucas Casasnovas as its new head of urban mobility.

His role will include all projects related to new urban mobility, including XMOBA and Respiro.

Prior to taking on his new role, Casasnovas was Seat's global director of product marketing, but will now be promoted to a position, in which he will report to vice-president for sales and marketing and Cupra CEO Wayne Griffiths.

Griffiths, said: “Urban mobility is changing, and our role at Seat is to adapt our business and offer new solutions for the cities of today.

“Lucas Casasnovas will have the goal of consolidating projects currently in progress and boost future strategy regarding new mobility trends.”

He has previously worked for Roland Berger and VWG, in both Spain and Germany.

In recent years, Casasnovas has been helping to redefine the company’s product portfolio to develop it to new trends in mobility and micromobility.

Its urban mobility strategy includes the Seat Minimó concept car which was presented at Mobile World Congress earlier this year, as along with the Seat eXS Kickscooter powered by Segway, which was led by Casasnovas.

Some of its mobility solutions will be presented on 19 November during the Smart City Expo World Congress in Barcelona.

During his career he has learned to speak Spanish, Catalan, English and German.

He also has a degree in Industrial Engineering from the Polytechnic University of Catalonia (UPC) and has an Executive MBA from IESE.

He brings nearly 25 years of automotive experience to the role, after starting as a trainee engineer at Seat in 1996.

Seat UK has named Swansway Crewe Seat Fleet Dealer of the Year, thanks to the quality of it service delivery to fleets, resulting in strong customer satisfaction and sales growth of 38% in 2018.

The new scheme aims to offer fleets a wide-range of perks to boost convenience, reduce cost and deliver the highest levels of fleet aftersales service.