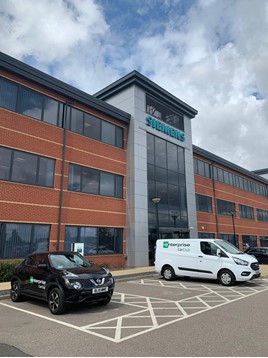 Siemens has reduced its travel costs by 28% in six months and reduced vehicles allocated for business travel by a third.

The company, Siemens Industrial Turbomachinery, a part of Siemens UK, did so by replacing its 20-vehicle pool car fleet with 14 dedicated Enterprise Car Club vehicles.

Its upgraded fleet consists of both cars and vans, which are located at three Siemens' offices in Lincoln and Aberdeen.

The business has already seen employees change their travel behaviour by using the car club vehicles.

“Many will now combine trips to multiple destinations, while being able to book the vehicles directly means we’ve been able to reassign the entire fleet team and move them to other work.

“We’re looking at expanding the programme to other sites because of the success it’s already demonstrated.

“Enterprise has enabled us to move from an unmanaged solution to a managed one and provided exactly the technology-driven car club package we need.”

The company’s new programme meets four of its key objectives of reducing the pool car fleet, reducing costs, improving vehicle utilisation and enhancing its use of digital processes.

Three Enterprise Car Club Nissan Juke SUVs are based at each of the Siemens' locations in Lincoln and Aberdeen, while five Ford Transit and Peugeot Partner vans are sited at the two Siemens' offices in Lincoln.

Each vehicle is bookable by the hour or by the day.

Siemens' employees can book the Enterprise vehicles themselves, either online or using a mobile app, instead of via the fleet team.

Its employees can now access any of Enterprise’s growing network of 1,400 on-street vehicles available for rent 24/7, 365 days of the year, in more than 170 cities, towns and communities across the UK.

Employees are also entitled to free personal membership for a year.

Many Enterprise Car Club vehicles are located at transport hubs or railway stations to make it easier to travel around the UK using public transport.