"There’s no fleet-friendly diesel option, although it has been designed to accommodate a battery pack so there’s a hybrid on its way." 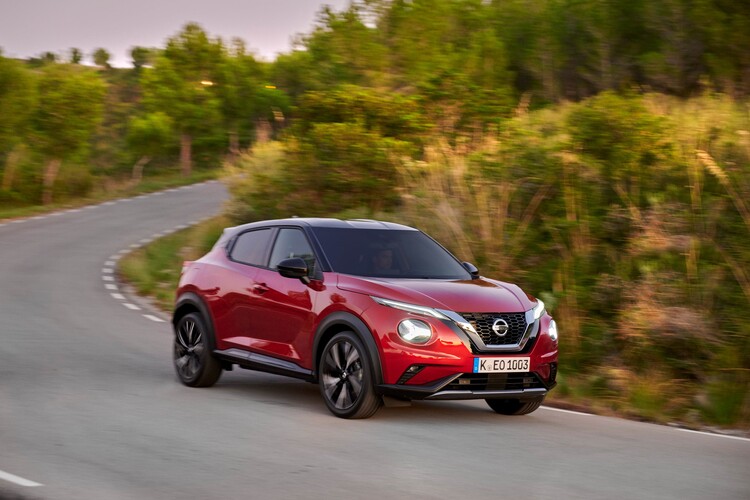 Nissan’s bold claims about inventing the B-SUV segment might be a little wide of the mark, but it’s certainly true that the diminutive Juke kick-started the inexorable rise of the undersized faux-off-roader.

It’s distinctive bug-eyed style divided opinion but helped sales, and Nissan is keen to continue the Marmite theme with the new Juke. It looks less radical than the outgoing model but is likely to be every bit as divisive as before.

The same can’t be said of the interior, which is now as conventional as could be. Addressing the criticisms of the old model, there’s been a noticeable effort to improve on perceived quality. Gone are the cheap, brittle plastics, replaced with soft surfaces, while a bold eight-inch infotainment screen sits on top of the centre stack.

Nissan is making a big deal of its new connectivity options, with the Nissan Connect app now able to work with Google Assistant. You can ask Google about how much fuel you have in the car, or if the tyre pressures are okay, for example.

The new Juke is longer and wider than before, which transforms the interior. Gone are the cramped rear seats, replaced with a bench that has enough headroom for all but the tallest of passengers, and an increase of almost 6cm in knee room. The same is true of the boot, enlarged to accommodate 422 litres of luggage, which is more than you’ll find in a Volkswagen Golf. The split/fold rear seats can be pushed down to increase that capacity to 1,305 litres.

While the Juke looks like an SUV, there’s a lot of Renault Clio in the chassis which means there’s no space lost to accommodating four-wheel-drive. There’s also no fleet-friendly diesel option, although it has been designed to accommodate a battery pack so there’s a hybrid on its way.

For now, you’ll be limited to the 1.0-litre three-cylinder petrol engine. This produces 118PS, which is enough to keep up with traffic.

It’s not going to win any performance awards, but then it’s a B-segment SUV so it’s going to spend most of its time battling through urban areas, and it’s plenty good enough for that.

Spending some time driving the Juke as it’s meant to be driven resulted in just more than 40mpg, which compares well to the official WLTP economy figure of 45.6mpg. The automatic model is a little thirstier, but not by any significant amount.

The entry-level model registers 110g/km of CO2, rising to 118g/km for the Tekna+ with larger 18-inch wheels. Each Juke will, therefore, fall into either the 26% or 27% BIK bracket, keeping company car costs in check.

Depreciation has always been relatively low on the Juke, which should keep leasing costs down.