UK drivers have revealed that 'not indicating' is the most annoying driving habit.

In a survey compiled by Click4Reg, drivers outlined the top 10 things that regularly irritate them on the road.

Not indicating was voted as the worst driving habit by 55% of respondents.

More than half (52%) also felt that 'leaving full beams on' was annoying, placing it second. The study shows that women find this habit more annoying than men (55% of women stated it annoyed them, compared to only 49% of men).

Driving 10 mph below the speed limit seems to infuriate many UK drivers, with 39% finding it frustrating. 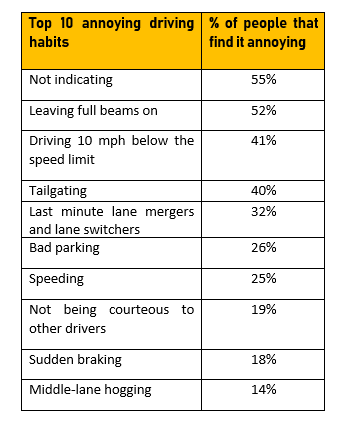 Of those that voted in the survey, 87% also admitted doing at least one of the annoying habits.

Looking at the difference between genders, 39% of females stated that their worst driving habit was bad parking while nearly half of men (43%) admitting their worst habit was speeding.

The study also asked its participants which drivers they found most annoying on the roads. Elderly drivers were picked as the most irritating, despite young drivers being much more likely to cause a crash.

Young male drivers were rated the second most annoying and lorry drivers appeared in third, with 26% finding them irritating. 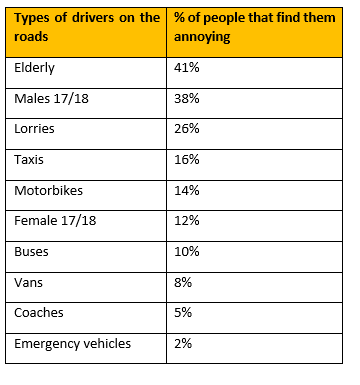 Brake is arguing for graduated driver licences after data showed that, on average, 33 new drivers lost their licence every day after reaching six penalty points.

Subaru has launched a new Forester, which comes with an E-Boxer hybrid engine.