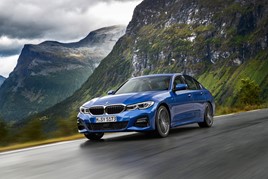 Launched in March, the seventh generation of this premium saloon was a clear winner in the minds of Fleet News’ readers asked to choose their favourite new company car of 2019 in an email vote.

Its mix of badge appeal, efficient engines and sporty styling proved the winning combination and saw the 3 Series at the top of the fleet sales league as well as being BMW’s best-selling model.

Key to fleets was the improvement in efficiency, through greater engine efficiency and choice – six petrol and diesel engines with a plug-in hybrid arriving in July.

Of particular interest to fleets, this can travel up to 37 miles on just electric power – a 50% increase on its predecessor – with average fuel at 138mpg and 39g/km CO2 emissions.

The top-selling model, the 330d, sees CO2 emissions from 110g/km to 122g/km and combined fuel economy of 67.3mpg to 60.1mpg, an improvement over the previous generation’s correlated-NEDC figure.

It may come as no surprise the 3 Series has won, since in November exclusive research by Fleet News for the FN50 revealed that BMW retained its number one position for the fifth year as the most reliable manufacturer amongst the UK’s top 50 leasing companies.

Despite only a few months on the market, FN50 data revealed the 3 Series was the second most reliable car on fleets, helping BMW retain the crown.

Judges’ comments: "Readers have reacted positively to the most modern car in the segment, which was replaced last year with a version that offers the latest safety technology, efficient engines, including plug-in hybrid, and connected services, while still delivering BMW’s promise of an outstanding driving experience.