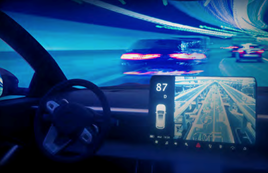 The UK risks falling behind with autonomous vehicle development due to not pushing ahead far enough with infrastructure preparations compared with other countries, according to new research from KPMG.

KPMG’s latest Autonomous Vehicle Readiness Index (AVRI) ranks the UK in ninth position for the most advanced autonomous vehicle markets in the world due to its leadership position around policy and security measures, but it said physical and digital infrastructure is needed to make sure it doesn't get pushed out of the top 10.

Compared to last year’s ranking, the UK has slipped two places, with South Korea and the United Arab Emirates inching ahead due to planned infrastructure investments.

For the third year running Singapore and the Netherlands lead the rankings, but the UK still stands ahead of Germany, Japan and new entrant Denmark, among others.

Sarah Owen-Vandersluis, partner and head of future mobility at KPMG UK, said: “Despite dropping two places, the UK continues to be a leader in autonomous vehicle legislation and policy, and has made notable progress to ensure that the regulatory environment will enable autonomous vehicle implementation.

“There’s real recognition for the work the Government has done around policy and legislation, notably through the Future of Transport Regulatory Review, as well as Zenzic’s work in cybersecurity and on test beds.”

The UK scored second to Singapore in the index for policy and legislation due to its continued and coordinated focus.

An example of this is the consultation the Government recently ran as part of its Future of Transport Regulatory Review, asking for evidence and views on micro-mobility vehicles, flexible bus services and mobility as a service (MaaS).

Test facilities have also bolstered the UK’s standing, with the Government and industry having invested almost £200 million in six test facilities for autonomous vehicles in south-east and central England, known as TestBed UK.

Cybersecurity shifts up a gear, but digital connectivity needs more to compete

Within the technology and innovation pillar, the UK moved up the ranks by two, to ninth position overall, and took the top spot for cybersecurity.

Earlier this year, Zenzic awarded £1.2m in funding from a competition focused on cyber security in self-driving vehicles, with the winners helping to define requirements for and support the development of cyber security testing facilities.

But, as tech and innovation for autonomous vehicles advances, KPMG is asking whether enough is being done to make sure the UK can compete on the global stage.

Ben Foulser, director of future mobility at KPMG UK, said: “Cybersecurity has been a hot topic for several years now, and the UK is really paving the way in setting the standard, with a number of projects underway across the country to develop cyber security solutions for connected and autonomous vehicles.

“However, while a number of promising developments are bringing autonomous vehicles closer to reality, there are also some important challenges which need solutions, particularly around digital connectivity.”

With infrastructure generally taking time to develop, some of the challenges recognised for the UK in last year’s index remain the same, particularly around digital and physical infrastructure.

However, a number of countries have moved ahead, through early activity in infrastructure generally in South Korea, and advancements in tech infrastructure specifically in the United Arab Emirates.

Owen-Vandersluis explained: “To be truly ready for autonomous vehicles, the UK first needs to be ready for electric vehicles, with adequate provision of EV charging infrastructure, which many local governments are already focused on.

“This is a critical element as the availability of EV charging infrastructure is an indicator as to how likely the market is to adopt new technologies like autonomous vehicles.

“There are also physical and commercial challenges to consider, whether it be a lack of power supply, lack of grid coverage or the need for a more viable business model, as these have historically prevented certain areas from having the necessary infrastructure.

“If the current road networks are to be significantly enhanced and managed in an entirely different way than ever before, a fundamental shift needs to take place and planning for that needs to start now.”

Foulser added: “For the UK to remain competitive in an increasingly 5G-ready world, there needs to be not only clear recognition of the need to invest, but action.

“The question of where that investment comes from remains to be seen, but without it, the UK will fall further behind its competitors.”

In this year’s study, South Korea and Australia, have overtaken the UK on customer acceptance and both countries have also made strides forward with infrastructure.

Owen-Vandersluis said: “Within our analysis, consumer acceptance was measured by how tech-savvy a population is, which is influenced by both the availability of infrastructure and also the demographic structure.

“So there’s an expectation that, assuming the same level of infrastructure, consumers in countries with a younger demographic will be more likely to adopt new technologies than those with more senior citizens. To combat this, governments will need to implement measures to ensure that new technologies, such as 5G and autonomous vehicles, will benefit all age groups.

“Ultimately, without being at the forefront of AV development and implementation, Britain is at risk of falling behind as a leading country in which to develop, trial, and scale AVs and associated business models and solutions.

“The UK has great potential to cement its position and compete on the global stage, but for this to become a reality, then action must be taken and investment secured, and sooner, rather than later.”