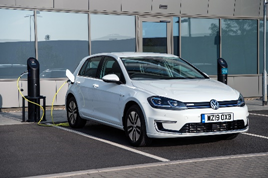 The Volkswagen e-Golf has achieved the strongest residual value in the electric car market, according to a study by CompareTheMarket.

The electric version of the Golf was ranked the top EV with the lowest depreciation of £7,778 (25.1%) after three years, with used models selling for an average price of £23,248 – three quarters of its new price three years ago. 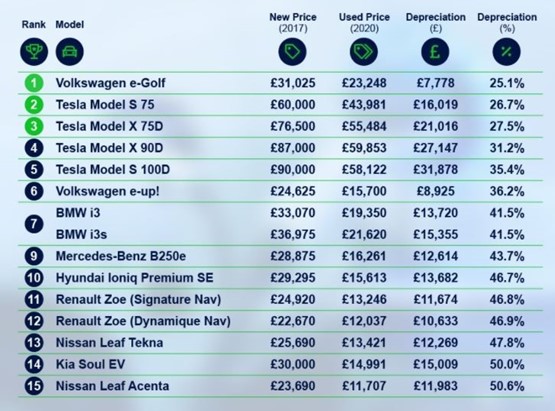 The research reveals how much electric and hybrid cars deprecate in value by comparing ‘new’ prices for the most common plug-in and hybrid vehicles to their used prices to reveal the vehicles which hold their value the most.

As Teslas are among the most expensive EVs and benefit from regular software updates, it could help the models retain their value, CompareTheMarket said.

Find out about the latest EVs and plug-in hybrids coming to market in 2021 in our latest digital edition of Fleet News.

When looking at plug-in hybrids, the Porsche Panamera E-Hybrid was found to have 'the best' resale value over the last three years, with depreciation of 21%.

This is followed by Mini’s hybrid offering, the Countryman Cooper SE (31.5%) and another version of the VW Golf, the GTE Advance (36.3%). 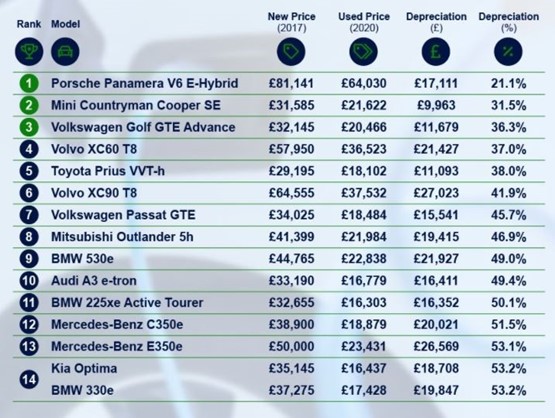 Dan Hutson, head of motor insurance at CompareTheMarket, said: “EVs are becoming increasingly popular, and now that they have been in circulation for a while we are seeing them come onto the second-hand market, which is great news for people wanting to buy an EV or hybrid at a lower price.

“As the technology improves and cars become cheaper, we are sure to see greater adoption, which is the greener step forward that we need.”

You can see the research in full on the CompareTheMarket website.

After six months on our fleet, the VW eGolf has proved its worth by reducing fuel spend and banishing range anxiety.

Volkswagen has revealed the prices and CO2 emissions for some of the new Golf range, which is available to order from February 6.

Residual values could fall by 10% over next year, warns BVRLA report

Residual values could fall by 10% over the next year as the economic effects of a recession and high unemployment bite.