Price parity for electric cars and vans within ‘five years’ 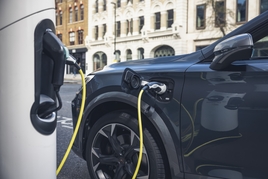 Electric cars and vans should be cheaper to make than petrol or diesel vehicles by 2027, with some segments achieving price parity from 2026, new research suggests.

The Bloomberg New Energy Finance (BNEF) study, commissioned by Transport & Environment (T&E), found that C and D segment vehicles and SUVs will be as cheap to produce as petrol vehicles from 2026, while small cars (B segment) will follow in 2027. 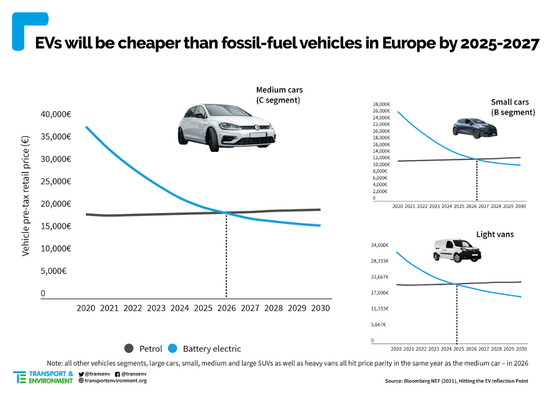 However, it explained that the early build-up of EV production and sales will be crucial to drive down costs and generate consumer buy-in for further adoption in the future.

The research found that battery electric vehicles (BEVs) could reach 100% of new sales across the EU by 2035, if lawmakers introduce measures like tighter vehicle CO2 targets and strong support for charging infrastructure.

T&E called on the EU to tighten emissions targets in the 2020s and set 2035 as the end date for selling new polluting vehicles.

The UK Government announced last year that new petrol and diesel cars and vans will not be allowed to be sold in the UK from 2030.

It has, however, said that it will allow the sale of hybrid cars and vans that can drive a significant distance with no carbon coming out of the tailpipe until 2035.

Julia Poliscanova, senior director for vehicles and emobility at T&E, said: “EVs will be a reality for all new buyers within six years.

“They will be cheaper than combustion engines for everyone, from the man with a van in Berlin to the family living in the Romanian countryside.” 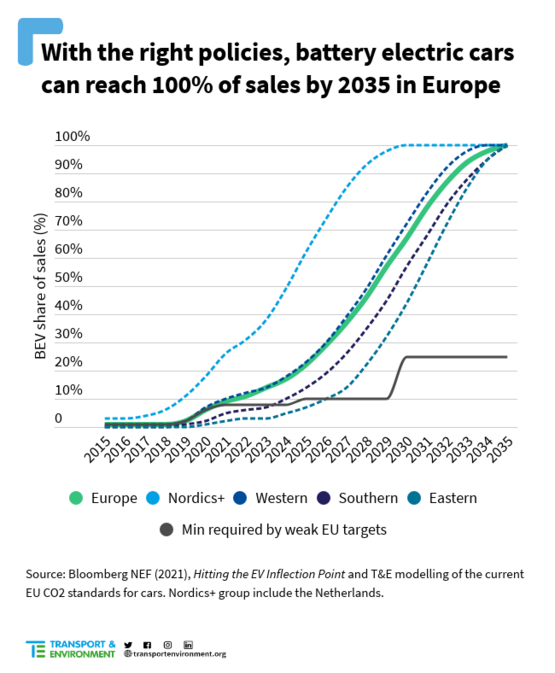 However, as it stands today, electric vans only account for 2% of sales. T&E says EU lawmakers will need to set van-makers challenging CO2 targets, alongside dedicated e-van sales quotas, to increase investment and the number of electric models on the market.

Poliscanova continued: “With the right policies, battery electric cars and vans can reach 100% of sales by 2035 in western, southern and even eastern Europe.

“The EU can set an end date in 2035 in the certainty that the market is ready. New polluting vehicles shouldn’t be sold for any longer than necessary.”

T&E says the EU Commission should set an end date for fossil-fuel car sales in June, when it will propose tightening the bloc’s car CO2 targets.

Last month, 27 major European companies called on EU lawmakers to set 2035 as the end date for selling new combustion engine cars and vans. A recent poll showed 63% of urban residents in Europe support a ban after 2030.

At least seven carmakers and 10 European countries have announced plans to phase out conventional cars. But, in the absence of an EU commitment, these deadlines remain either voluntary or uncertain as to their enforceability, says T&E.

Separate research suggests that the UK’s drive to switch to electric cars, trucks and vans from 2030 risks failing, because of serious cost concerns from the country’s SME business leaders.

The YouGov survey, commissioned by Mer - part of Norwegian clean energy giant Statkraft, asked 861 businesses in the UK whether EV charging was on their radar, what they perceived as barriers to installing charging facilities, and who they thought was responsible for encouraging adoption.

When asked what would encourage SME business owners to install charging points at their workplace, they said tax incentives (37%), followed by ‘cheap installation’ (35%), and the relative cost of EVs (32%).

Nine percent of SMEs, however, stated they already had EV charging points on their premises - a figure that leapt to 17% for medium sized SMEs (those with 50 - 250 employees).

A further 21% (or 30% in medium sized SMEs) were planning to install EV chargers before 2030 - when the Government’s ban on new diesel and petrol vehicle sales comes into force.

Mer UK managing director, Anthony Hinde, said: “There are really strong indicators here that SMEs do see the value in installing EV chargers - both for their customers and as ways to attract and retain staff.

“It's also clear they are going to need - and are asking for - support from Government and local authorities to help with the costs involved in putting in chargers.

“But just like in Norway, this is a huge opportunity for politicians to react and take action - cut VAT on new EV cars, up the subsidies, and apply further tax incentives for those working with UK infrastructure - so we can meet the 2030 target and ensure we power more vehicles with less polluting technology.”

Mer recently launched into the UK to support and lead the UK’s transition to EVs.