Audi will only launch new all-electric models from 2026 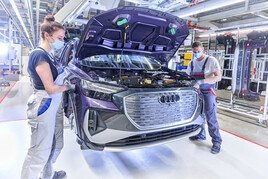 Audi has announced that it will phase out production of its last internal combustion engines (ICE) by 2033, with all new cars being all electric from 2026.

Audi CEO Markus Duesmann says that as part of its strategic realignment, the company is accelerating the transition to e-mobility as it aims to achieve net-zero emissions by 2050 at the latest.

“With this roadmap, we are creating the clarity necessary to make a decisive and powerful transition to the electric age. We’re sending the signal that Audi is ready.”

The carmaker, however, expects to see continued demand in China beyond 2033 for ICE vehicles, with potentially a supply of vehicles there with combustion engines manufactured locally.

Audi says it will significantly expand its range of all-electric models, with more than 20 zero-emission models expected in its line-up by 2025.

In the meantime, it says it will also be investing all its efforts in the development of the combustion engine right up to its final discontinuation to achieve greater efficiency. “Audi’s last internal combustion engine will be the best we've ever built,” said Duesmann.

In terms of current plug-in product, Audi recently confirmed the new Q4 e-tron electric crossover will be priced from £40,750 and offer a range of up to 316 miles.

The new model shares a platform with the recently launched VW ID4 and Skoda Enyaq iV. It will be offered in SUV and Sportback bodystyles.

At the entry-level, the Q4 35 e-tron and the Q4 Sportback 35 e-tron use a compact 52kWh battery and a 170PS electric motor. This is sufficient for 9.0-second 0-62mph acceleration and a WLTP-certified range of up to 208 miles on a full charge.

Audi also revealed the new e-tron GT at the start of the year, a fully-electric saloon car, with a power output of 476PS, with 530PS available via ‘Boost Mode’. This means it can accelerate from 0-62mph in 4.1 seconds.

> Looking for information on EVs? Check out our electric car and van data tool

Audi has confirmed the new Q4 e-tron electric crossover will be priced from £40,750 and offer a range of up to 316 miles.

Audi UK has announced James Buxton will be leaving the business, with Claire English named the new head of fleet.

Audi has launched an updated version of its EV&me app, which helps drivers to understand the benefits of opting for an electric (EV) or plug-in hybrid (PHEV) vehicle.