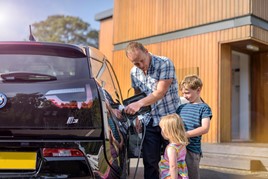 Transport minister Rachel Maclean has paid tribute to the fleet sector as the driving force behind the UK’s move to decarbonisation.

“You are at the forefront of the change… you have a lot of influence,” she told an audience of fleets, leasing, manufacturers and suppliers at the British Vehicle Rental and Leasing Association’s autumn parliamentary reception.

However, she acknowledged that EV uptake was “not moving fast enough”, with around one-in-seven new car sales a plug-in vehicle so far this year.

With the ban on sales of new petrol/diesel cars and vans set for 2030, “we need to get to nine million in under nine years – that’s the target”, Maclean said.

Government was creating the conditions with plug-in grants and tax incentives, but “success rests on having an adequate infrastructure”, she added.

Over the next four years, it will invest £1.3 billion, with the current roll-out reaching 500 charge points a month, of which 100 are rapid chargers.

“It’s a race against time,” Maclean said. “We are in a defining decade to prevent irreversible damage.”

Launching the BVRLA’s Road to Zero 2021 roadmap, chief executive Gerry Keaney described the 2030 ban on sales of new petrol/diesel vans as “ambitious” but said the phase out plan for HGVs (2035 for trucks up to 26 tonnes, and 2040 for heavier trucks) was “beyond ambitious”.

The association’s score card methodology on progress was “red, red, red”, he added.

“We have a commitment to a date, and it stops there. We have no vehicles or clarity on the technology roadmap, or charging, or hydrogen refuelling.”

While van adoption was in a better position, there remained challenges over supply and concerns about bulk workplace charging infrastructure.

He described it as “ridiculous” that some companies were being told to pay for a local substation in order to transition their fleet to electric.

“The Government needs to do more in incentives and grants, especially in the SME sector,” Keaney said.

He also urged the Government to consider support for the used market, claiming that the lowest 40% of earners buy used and were at risk of “being excluded” because they can’t afford to make the change.

His view was supported by Arval UK managing director Lakshmi Moorthy, who said it was “super critical to stability and secure” the market for used electric vehicles. “We are at risk of leaving behind a huge swathe of the population and SME businesses.”

She also called on ministers to provide “clarity and foresight” for tax incentives beyond the current 2025 for BIK rates. “We need to extend that view,” she said.

Meanwhile, demand for electric vans is “fragile”, with many companies “not comfortable” making the change.

Arval is looking at ways to “nudge” them but needs support from the Government.

“Prolong the plug-in grant or look at the super-deduction for vans that doesn’t exist for leasing companies,” Moorthy said.

BVRLA to work with research and data providers for fleet insight

The British Vehicle Rental and Leasing Association is partnering with APD, Auto Trader and Cap HPI to provide market data and trend analysis for its members.