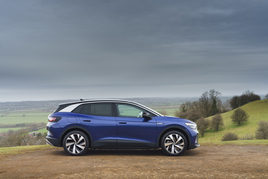 LeasePlan UK says that mid-size and compact electric vehicles (EVs) are now more affordable than petrol and diesel cars in the UK.

The findings from LeasePlan’s annual Car Cost Index, which analyses of the cost of owning a car – including fuel, depreciation, taxes, insurance and maintenance in 22 European countries including the UK, improves on last year’s analysis that found that only mid-size EVs were more affordable.

For a mid-size EV, such as the Volkswagen ID.4, the total cost of ownership (TCO) is £724 a month, which is £95 less than the TCO for an equivalent petrol model such as a Peugeot 508, and £37 than an equivalent diesel, such as the Opel Grandland X.

The cost savings are largely down to EVs having the lowest rate of fuel/energy costs, and EV drivers currently paying zero road tax until 2025, keeping the TCO low for drivers, says LeasePlan.

Alfonso Martinez, managing director of LeasePlan UK, explained: “As EV uptake continues to gain traction in the UK, drivers across the country should be considering their options for going electric.

“With both compact and mid-size EVs now more affordable than their petrol and diesel counterparts, driving electric has never been more accessible, which midst a background of soaring fuel costs, will be especially encouraging for the UK public.

“What’s more, the 2030 ban on the sale of new petrol and diesel vehicles and the expansion of Clean Air Zones across the country will continue to provide financial incentive for Britons to switch to EVs.”

The automotive industry has made great progress to bring electric driving costs to their current level, but the work doesn’t stop here, adds Martinez.

“To prove its credentials as a world leader in the fight against climate change, the UK Government must prioritise investment in charging infrastructure,” he said.

“With the recent announcement that the Home Charge Grant will be unavailable to certain homeowners from April 2022, it is clear that there is still a job to be done in developing charging infrastructure and enabling financial incentives to encourage the switch to an EV – but it’s positive to see the Government allocating investment to other properties such as rentals and transport hubs.”

SG Fleet is set to buy the Australian and New Zealand-based business of LeasePlan, in a deal that is expected to be completed this summer.

One-quarter of decision-makers are not aware of the financial incentives available for adopting electric vehicles, LeasePlan UK research has found.

Now is the “perfect time” for fleet decision-makers to reassess their fleet needs and start electrifying their vehicles.