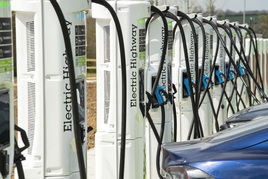 Pricing for medium power chargers – typically 60kW – which are primarily located at motorway service areas is increasing from 30p to 39p per kWh with immediate effect.

However, it said that pricing for high power chargers – up to 350kW – located at its newly developed Electric Hubs (of which it currently has 13 in construction), is 45p per kWh.

It is also keeping pricing at 39p per kWh – even for 350kW chargers – at its Electric Forecourts thanks to onsite solar generation and battery storage which gives the company more control over energy and distribution costs.

Gridserve says that it recognises the better the economics are for using EVs versus petrol or diesel, “the quicker people will make the switch”.

It is why the company says it is investing in new solar energy and battery projects which help to protect customers against the type of price hikes and instability that is currently affecting the energy market.

Gridserve says it wants to revolutionise EV charging across the UK, following the acquisition of Ecotricity’s Electric Highway network in June 2021.

It is expecting to open more than 20 ‘electric hubs’, each featuring 6-12 x 350kW ultra high-power electric vehicle (EV) charge points with contactless payment, at motorway service stations across the UK by Q2 2022.

The majority should be installed by the end of March, with a further 50 additional electric hub sites set to follow.

Two Electric Forecourts situated adjacent to major transport routes and motorways, including a flagship site at Gatwick Airport and Norwich, are also in construction, due to open in 2022.

Several additional Electric Forecourt sites now also have planning permission including Uckfield, Gateshead, Plymouth and Bromborough, with more than 30 additional sites also under development as part of the company’s commitment to deliver over 100 Electric Forecourts.

Gridserve’s price hike follows InstaVolt raising its prices from 40p/kWh to 45p/kWh from December 1, as a result of the increases in the wholesale price of energy.

BP Pulse also increased its prices from December saying that the charging network was “no longer able to absorb the rising costs”.

Gridserve to replace all Ecotricity EV chargers by September

Gridserve will replace the entire network of old Ecotricity electric vehicle (EV) chargers by September as part of its new Electric Highway.