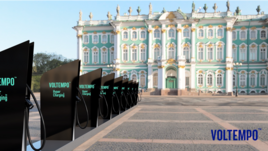 Voltempo has launched a 1,000kW HyperCharging charger which it says will be able to charge the next generation of EVs in as little as six minutes.

The company says the technology is 2.8 times faster than any comparable charging system and is able to charge up to 24 vehicles at the same time.

Designed and built in Britain, the company said the system has been designed around the needs of service stations and fleets, and is suitable for cars, vans, trucks and buses.

The power can come from multiple sources – for instance, combining the national grid with local green energy sources such as solar and battery energy storage.

Michael Boxwell, CEO of Voltempo, said: “Earlier this year, we announced a world first when we carried out a public demonstration in which we designed and installed a prototype battery in an EV and completely charged it in under six minutes.

“However, the demonstration showed it will be able to charge the next generation of EVs in a similar time that it takes to refuel a conventional, petrol-driven vehicle.”

A demonstration version of HyperCharging can be seen at Voltempo’s Technology Design Centre in Birmingham.

The first installations of the technology will begin in Match with a charging hub that will be installed at the Tyseley Energy Park in Birmingham.

It said HyperCharge can be installed anywhere, particularly in locations that need to charge a lot of vehicles at the same time, and the technology’s modular system enables it to be installed 70% faster than other charging systems.

As the electric vehicle industry progresses rapidly, many of the early obstacles are being overcome.

Demands on the UK’s electricity network are set to rocket as the country moves closer to the ambition of a net zero economy by 2050.