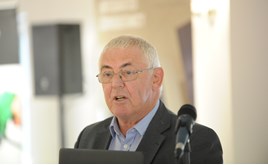 Maurice Elford has taken on a new set of fleet priorities since becoming housing association L&Q’s first fleet manager in 2014.

“Suddenly I was confronted with these white things with a wheel at each corner and no windows at the back, having dealt with cars all my life,” Elford told delegates at the Fleet200 Executive Club.

However, Elford (pictured) has relished the challenge, earning L&Q two Fleet News Awards earlier this year: Fleet of the Year - up to 250 vehicles and Most Improved Fleet.

Elford was appointed when L&Q decided to bring property management back in-house and needed a full-time fleet manager. He took on a fleet of 63 vehicles which has since expanded to 260.

His first task was to acquire fleet management software and he then set about developing a fleet strategy, which included "a more scientific approach” to how the vans were fitted out.

“The principle aim was to get the best vehicles for the job so we talked to the drivers about what was best for them,” he said.

“Two things I learnt very quickly was the standard length of a kitchen work surface and the length of copper pipes is three metres, and the width of a standard bath is 700mm so when we fitted the plumbers’ vans out because they have got racking both sides we had to check that the gap between the two was 700mms.

“We now have 12 combinations of vehicles and fit-outs so we have specifications for electricians, plumbers, UPVC window repairs, multi-trade carpenters, ground-workers, roofers etc.”

Another significant step has been the introduction of telematics, which has brought safety and financial benefits.

Next on the agenda is electric vehicles with two Nissan e-NV200s set to join the fleet in central London where they will do low mileage and can be charged up at night.

> To receive a copy of Maurice Elford's presentation email jeremy.bennett@bauermedia.co.uk.