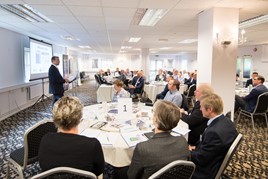 Fleet decision-makers at the September Fleet200 Club meeting gave their views on integrating telematics to reduce road risk, getting board approval for safety policies and getting driver buy-in.

Telematics are an effective way to reduce risk

Implementation of telematics technology continues to be a popular and effective way for fleets to reduce risk. It is widely used to monitor driver behaviour and identify areas for improvement.

One fleet had seen monthly speeding tickets reduce from between 50 and 70 a month to just one.

However, it is not enough to just have the technology: fleet decision-makers need to intervene when poor driver behaviour is flagged up.

Board buy-in key to success of road risk policy

It is vital to gain buy-in from the board when implementing a new driver and road risk policy.

This helps departments such as human resources, health and safety and finance become involved in the formation of a new policy, which will further increase buy-in.

Another way to gain buy-in to a road safety improvement plan is for an organisation to make a public commitment to it, potentially through its website. However, this is not necessarily an easy thing to achieve.

Fleets found that combining separate company car and van policies into one document had been effective and provided clarity to drivers.

Organisations which operated a ‘one man, one van’ policy found that their employees looked after their vehicles better than if they were used by a variety of drivers.

They showed more pride in their vehicles and were more likely to do daily walkaround checks and report damage.

However, another fleet decision-maker said they had found that if a vehicle had multiple drivers then those employees were keener to carry out checks as they did not want to be blamed for any damage.