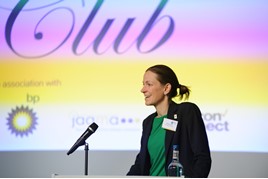 Fleet decision-makers looking for support for the electrification of transport within their businesses can call on an international climate action body.

The Climate Group was established in 2004 to unite businesses and governments to influence global markets and policies to support positive environmental measures. Specifically it aims to reduce global warming to no more than 1.5 degrees centigrade*.

The group established EV100 last year to support companies’ adoption of electric vehicles and provide a platform for them to make public commitments to vehicle electrification by 2030.

Since businesses operate more than half of all registered vehicles, it is “crucial” they lead the change, EV100 says.

Its head Sandra Roling (pictured) told November’s Fleet200 Club meeting at the Mini Plant, in Oxford: “We have about 12 years left to ensure the world’s temperature increases less than 1.5 degrees.

“The good news is that the adoption of electric vehicles is accelerating. There are four million on the road now, with the last million coming in just more than six months. More than 300 electric models are expected to be on the market by 2021.

“But we need to build the demand and believe companies are an important part in that, partly through their own demands for electric vehicles, but additionally through bringing them to the attention of staff and making them more visible in day-to-day life. Business can also play its part in influencing policymakers.”

The Climate Group then profiles supporting companies, shares best practice and supplies an annual report tracking signatories progress. There are now 26 companies part of the EV100 initiative. These include EDF, Ikea, Heathrow Airport and DHL.

Heathrow’s use of electric pods to move passengers from its carparks to terminals. They are saving carbon emissions equivalent to 70,000 diesel bus journeys per year. And with 80 charging points Heathrow has the highest charging infrastructure density in Europe – and it has more than 800 EVs in operation.

* An Intergovernmental Panel on Climate Change report highlights a number of climate change impacts that could be avoided by limiting global warming to 1.5ºC compared to 2ºC, or more.