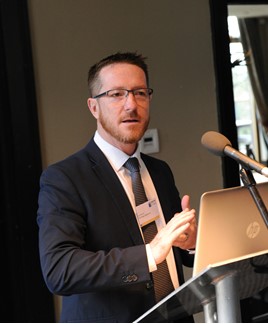 That was the advice from Ian Cameron, head of innovation at UK Power Networks, which operates three electricity distribution licences in the UK (Eastern, London and South East).

“Today we have 63,000 electric vehicles on our networks and our forecast for 2030 is for that to be 4.1 million, that's a huge growth,” Cameron told members of the Fleet200 Executive Club.

To prepare for that growth, UK Power Networks is using widgets to monitor the profile and usage of EVs on its network and is forecasting where future demand will be.

It has worked with the Mayor of London’s taskforce to develop maps to show which areas are likely to have sufficient capacity for EV uptake by 2025 (deemed ‘green’), which areas should use smart charging options to give the network operator flexibility (‘amber’) and which areas will pose a problem and an increase in costs if smart options are not used (‘red’).

Cameron believes that smart options such as ‘responsive signal’ (essentially responding to a request from the operator to reduce usage ahead of peak time) and ‘timed signal’ (for example, being paid a fee to slow down by one or two kilowatts at a set time), will give network operators “the level of resilience and forward planning we’re looking for”.

It could help the network to cope with 20% of the 30% increase in peak demand which is forecast by the end of the 2020s, according to Cameron.

“Smart charging is a key point for UK Power Networks,” he said. “It is something we can deploy now if people are flexible.

The idea Cameron said is to “develop solutions to enable fleets to charge at home, depot or en route with least disruption”.

The ‘return to home’ part of the project is important for UK Power Networks as it currently has “no visibility” of domestic EV charging.

“If a fleet driver took a vehicle home and charged off a domestic supply we wouldn't know, we wouldn't have access on that flexibility,” Cameron said.  “It’s important for us to understand return to home so we can access that flexibility and give an incentive.”

The challenge with depot-based fleets is that the costs are too high for them to charge a large number of vehicles. However, Cameron believes the problem is that depot owners tend to request blocks of capacity in round figures, which can mean they reach “the tipping point” that will “push the bill up by millions potentially”.

He wants to understand the exact amount of electricity needed rather than a block of capacity.

The public charging element of Optimise Prime seeks to understand where the gaps are in the current infrastructure.

Optimise Prime aims to ultimately develop tools that will make it easier for fleets to switch to EVs.

> MORE: If you would like Ian's presentation (pdf) email jeremy.bennett@bauermedia.co.uk.

Britain’s local electricity networks have launched new reforms that will cut the paperwork required for connecting electric vehicles (EV) to the grid.