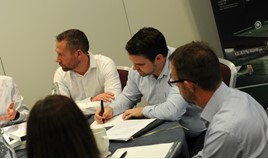 Below is a selection of comments made to Fleet News by fleet managers.

“We don’t allow drivers to travel excessive distances when using their own cars for work. If they plan to do more than 50 miles they would use a hire or pool car.

“Reasons for this are cost, as we pay 45 pence per mile for use of their car, but more so down to managing the risk – we don’t know the age of the car or how well it has been maintained. When the policy was implemented, the FD didn’t want to end up in jail.”

“Employees that take a cash allowance have to provide evidence of business insurance on the vehicle. And on the instruction of our insurers we ask the supplementary part of the insurance. The cars can be up to five years old or 90,000 miles on the clock.”

“Our cash allowance drivers have to submit their mileage monthly as we pay for the fuel within that payment.”

“We do the licence and insurance checks for our grey fleet drivers, but ultimately we rely on driver honesty around minor dings and dents. Human nature suggests they wouldn’t tell the business. They could be hitting a wing mirror on every journey and I might never find out. But because they are in the grey fleet they should be low mileage drivers with less opportunity for an incident.

“We’ve ruled out business use only vehicles. HMRC says we have to provide evidence the car has not been used privately which we couldn’t work to. Now some drivers are saying they don’t want a car, but a van because they wrongly believe it will be cheaper.

“The changes to BIK, which have led to personal tax increases, drivers are using every excuse to change their car. HR is having to deal with financial hardship claims now.”

“Since we started charging to plug in at work, the hybrid drivers don’t bother.”

“To qualify for a plug-in car our drivers have to have a charging point at home. The cost gets added to the lease.”

“Our vehicle policy needs a kick. I’m on the verge of saying we will have hybrids, plug-in and diesels as long as they are RDE2* compliant. It will mean a lot of cars coming off the choice, but why should I submit my drivers to a 4% VED hike?

“But so many drivers don’t understand the RDE implications. Come April I’ll have a lot more saying they can’t afford their car because when they made their car choice a couple of years ago they were like kids in a toy shop thanks to the discounts manufacturers were giving and attractive lease rates. Now they’re a financial burden.”

“We get accusations that ‘you’ve made the scheme very expensive’. We haven’t. The world has changed in the fours years since they chose their vehicle.”

“Many of us are having to review our travel policies, or large parts of them, because of the changing nature of our businesses and the company car industry. We’re juggling what our businesses expect and what the industry is supplying. Typically the industry can’t supply the vehicles we want: ‘You can’t have a Leaf’.

“We did look at a device that blocked a signal, but there was too much grief from drivers to continue it. We couldn’t expect them to link a personal phone to the system.”

“Our company checks driver telematics records against their phone bill. But this will only include outbound calls of course.

“We’re moving to a Microlise telematics scheduling system. It can also give instructions via a tablet, as well as communicate arrival times to a store and the return journey, mileage details, driving styles, navigation aid and fuel usage. It can mean the end of mobile phones in cabs.”

“We’re trialling in-vehicle cameras and some drivers cover them over. But the footage is revealing, showing the use of phones, one hand on the wheel, smoking and how they react to traffic conditions, aside from the bad language.

“Our justification for fitting them was protection in the event of an accident. It would provide us mitigation details, and not to spy on them.”

“Most of our incidents involve low speed manoeuvering prangs so cameras didn’t provide the justifiable return on investment.”

“Managers have a five-page disciplinary guide, outlining as much as possible every realistic scenario and recommended actions. For example turning the tachograph off triggers a written warning. The goal is to provide a consistent approach in the business.”

“Our risk assessment tool allows us to monitor accidents, tyre wear, driving style, licence points and speeding incidents. The events severity triggers a one-to-one with a manager or a training requirement tailored to addressing the specific issue.”

“Our commercial drivers’ driving habits are recorded via telematics and are entered into a league table shared with their shift manager and the results are part of their annual employee appraisal and will affect their pay rise.”

“Our line managers have responsibility for addressing the issues raised by our risk management system.”

“We’ve discussed it over the year, but rejected it. We shouldn’t be rewarding something that is a basic expectation of the business. We only reward what is above and beyond what’s expected in all parts of the business.”

“For the first time we ran a driver of the year event. Looking at the whole fleet, selected about 60 drivers based on a 60-minute assessment in their vans, including driving skills and quality of the vehicle.

“A shortlist of 40 were invited to an event at Silverstone. The approximate cost of £25,000 to £30,000 was covered by sponsors. We rewarded about six prizes. It was judged such good value that the business would probably pay the cost if necessary. Our aim is to improve the average standard.”

Getting your message across to drivers

“I’m sensing a push back from drivers, a small sense of rebellion, as the increase in corporate oversight and increase in how rigidly they’re managed to the minute of each day.

So, ‘you tell me to go to one garage, I’ll go to the one next door’, or the coffee’s better at another one, they can get Nectar points at the alternative.”

And taking the train

“A lot of senior managers are opting to travel by train instead of the car because it is less stress, reduced risk and it provides the ability to work. A colleague changed trains four times to get to a  meeting.”

*Cars emitting 1.5 times the amount of NOx during real driving emissions testing. This becomes mandatory for all cars on sale by January 2021.

> The above comments were made by members of the Fleet200 Executive Club during a roundtable discussion on travel and communication policies at their September meeting.

How good is your grey fleet?

Grey fleet can be a cost and duty of care nightmare for organisations, but how does your operation measure up? Take part in this simple quiz to find out how good yours is – or whether you need to take action to improve it.