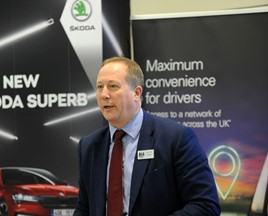 Reducing the time it takes to processing operator licence applications to 35 working days is a key target for the Office of Transport Commissioners (OTC).

He said he does want to see any applications outstanding for more than six months when it’s in control of the OTC.

Turfitt added: “This does happen and we can go beyond six months where, for instance, somebody is being investigated by the police.

“A criminal investigation can take a very long time. We are not going to power ahead with public inquiries which may jeopardise criminal proceedings.

“We’ve got to protect the rights of the defendant as well as the prosecution.”

He added: “As traffic commissioners, we have demanded monthly reports from the DVSA on any outstanding application.

“Each individual commissioner gets hold of these schedules, looks at the records and says ‘what’s going on here? I want action now’.

“We’ve been very successful. We’ve shrunk the size of the schedules significantly within a matter of six months.

Plans the OTC has include:

Turfitt added: “We need to look at the standard of evidence and this is where we do rely on the enforcement agencies to help us.

“I can only take action against rogue operators once I’ve got the evidence. I hear whispers, but I can’t do anything on a whisper. I can’t even do anything on information.

“I have to have it in a form I can disclose to the person facing action. Anonymous information is very difficult, it may prompt inquiries, but it means I’m heavily reliant on DVSA and the examiners do a fantastic job in difficult circumstances at times.

“I have to have grounds for calling people in and the grounds are based on evidence and that takes some skill to collect sometimes.

“It’s also important that those who are investigating don’t just look for the evidence that points away from that, but could mitigate, or explain, or maybe shows they are not guilty.”

Schneider Electric has launched an ultra-low emission company car policy as part of its efforts to cut CO2 emissions by 10%.

Get Brexit done whatever the circumstances, say fleet decision-makers

Many fleet operators just want to know the outcome of the Britain’s divorce from the European Union, whatever the circumstances.