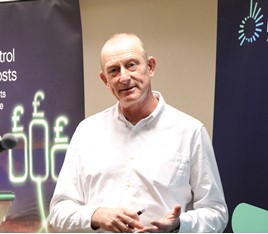 Collaboration, engagement and myth-busting were all tactics used to get ‘bums on seats’ and introduce a highly successful electric vehicle fleet integrated into a cutting edge university project.

From installing a single charge point for a couple of hundred pounds in 2012 to today when 70% of its fleet is EV, with 26 electric vehicles from six manufacturers and 20 charging points.

Over the seven years the fleet has covered 240,000 zero tailpipe emissions; it has saved £30,000 in fuel costs and reduced its carbon emissions by 60 tonnes.

“The university’s 2,000 staff have an average daily commute of 20 miles at 40mpg,” Morris said. “That’s 500 gallons a day going up in smoke, 120,000 a year. That’s why we needed staff and EV charging. And key people in the university understood this.”

He said there was a no better way to investigate the value of moving to an EV fleet than first hand, engaging with the university at all levels and collaboration, “and then when you have something working, push it, break it, fix it and move on”.

Morris started week-long trials of EVs loaned by manufacturers, targeting staff at his university “who might have an opinion”, the porters and the senior staff, including the vice-chancellor driving a van. He gave his support to use of electric vehicles in the mail, catering, maintenance and accommodation departments.

“When you are introducing something new, it’s important to get the support of an influential figure in your organisation. Start small, by getting one or two vehicles and let staff drive them.

“And be inclusive, get bums on seats and get as many people’s attention as you can. But pick the tasks that you know an EV will work with.”

Morris started with a “back to base operating radius”, based on battery life of 40 miles in 2013, increasing to 125 miles this year, with staff on regular duty cycles. The university’s Kia Nero and Hyundai Kona, with a 64Kw battery are each doing 20,000 miles a year because drivers are comfortable with their range of about 235 and 279 miles fully charged respectively.

You should also address people’s concerns. “Can I drive an EV through a carwash, or drive through a puddle? These are the sort of concerns you’ll hear and you must coax people along.”

EVs should then be part of your procurement policy, and support drivers with induction and driver training and journey planning with apps and maps from ZapMap, Polar Plus, Chargemap, Plugshare etc.

Through reaching out to other organisation with a similar goal to his Morris collaborates with local organisations such as Low Carbon Swansea Bay, Brecon Beacons National Park and the City & County of Swansea to form the Swansea ULEV Task Group serving as a problem solving and knowledge base.

Once a year Morris also gets each university department’s fleet head together to share their experiences. “And if Shell or BP put a fast charger in your neighbourhood tell people about it.”

Finally, Morris urged EV advocates in fleet to keep sight of why their use is important.

“Every day globally, we extract 92.6 million barrels of oil, enough to fill 6,000 Olympic-sized swimming pools and we burn it. We’ve banned smoking in cars and buildings and exhaust pipes on cars are like industrial chimneys. We need to get rid of them.”

There’s also an additional, significant element to EV charging at the university. Swansea is the headquarters of the Active Building Centre, an academic and industry partnership to develop and promote the concept of buildings that can capture energy, via printed solar panels, from the sun for power. This can be used in buildings, with the surplus passed to its EV charging points, decarbonising heating and transport.

The ABC partners with other universities and businesses such as Tata Steel, Siemens, Nissan and Tesla.

> The above was taken from a presentation by Nigel Morris at the Fleet200 Executive Club meeting in November 2019.