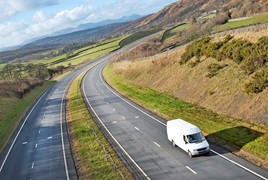 Operating lease continues to be the most popular method of funding vans among organisations which took part in this year’s Fleet200 research, but it is less widespread than a year ago.

In 2019, 60% of respondents said they use it to procure light commercial vehicles (LCVs), but this year the proportion has fallen to 48%.

Outright purchase remains the second most used funding method, but this, too, has seen its popularity reduce: last year it was used by 52% of respondents – this time it is 47%.

Last year’s biggest change was the increase in the number of organisations using flexible rental: 24% said they procured LCVs this way compared with 13% in 2018. This year, however, the proportion has fallen slightly to 19% – the same as use finance lease.

Fleet200 organisations are also using fewer funding methods than last year. In 2019, 55% of respondents used one funding method, 35% used two, 8% used three and 3% used four (all percentages are rounded to the nearest whole number, so may not add up to 100%).

Countryside Properties is one of those organisations which reduced the number of its funding methods from two to one in the past year.

Chris Connors, head of facilities and fleet at Countryside Properties, says this follows his organisation’s acquisition of affordable homes builder Westleigh in 2018.

“It had various different procurement methods for its LCV,” he adds. “We, as Countryside Properties, have traditionally used contract hire.

“As part of the transition, we sold some of the vehicles and used sale and leaseback with our provider for some of the others we wanted to keep.”

Connors says one major reason it moved the whole fleet to operating lease is down to Countryside Properties’ small in-house facilities and fleet team Consequently, it looks to outsource to specialists wherever possible.

“Keeping that one-stop shop and that ease of having a fully-managed contract hire arrangement just means we can have a smaller, leaner in-house team, which helps with ease and convenience,” Connors says.

“The finances also stacked up when we looked at the cost between what we do now against what was being done.

“Contract hire is less risky for us because, as long as we meet the criteria of the contract, we can budget and we can map spend, and we don’t have to worry about residual values and what the market is doing because at the end of the four-year term, we just hand the vehicle back to the lease company.

“Had we purchased outright, then we’d be looking at the markets and having to work out when would be the right time to sell.

“(Funding) is probably an area we need to review in the next 12-to-18 months just to make sure that what we thought two years ago remains relevant today as well as going forward.”

Countryside Properties sits in the Business Services sector in the Fleet200, in which 57% of fleets use operating lease.

It is the most popular funding method in this category, followed by outright purchase and flexible rental (both 27%) and finance lease (10%).

In contrast, outright purchase (50%) is the most used method by Primary, Manufacturing and Construction fleets, followed by operating lease (40%), flexible rental (20%) and finance lease (18%).

The mix of funding in Transport, Wholesale, Retail, Distribution, Information and Communication sector more reflects that of the Business Services category: 53% use operating lease, 27% use finance lease 23% use outright purchase and 13% use flexible rental.

Kelly Group, which sits in this sector, goes against the grain by funding 70% of its vans through outright purchase and 30% by flexible rental. This was the same mix as in 2018, while last year it was 80:20.

Dermot Coughlan, fleet director at Kelly Group, says this approach gives his employer a mix of stability and flexibility.

“We are set up to run an in-house fleet; we do all our own racking, beacons, Chapter Eight, etc., so we’re pretty much self-sufficient,” he says.

“When the company grew, the fleet got bigger and now have our own bodyshops, our own garages and mobile mechanics, so it suits us to run our own vehicles and we can run them efficiently and keep our wholelife costs down.

“Outright purchase means we can keep them as long as we want, but it also gives us another flexibility in that it’s quite easy to dispose of them quickly if we needed to reduce our numbers.”

As they are not leased, they are not subject to any early-termination charges if they were returned before the duration of their contract.

Flexible rental, says Coughlan, adds a different type of flexibility to the Kelly Group fleet. “A lot of the contracts we do are not long term – they could be six, 12, 18 months or they could even just be a six-week contract.

“If we have a short-term project we’ll use flexible rent for the whole thing, and, if we get a longer contract at short notice, then we might hire some vans just to get going, so we can mobilise quite quickly.

“You can’t always just run down before dinner and buy a van. Those days are long gone. We do have a very good supply chain, but it’s good to have that kind of flexibility.

“The contracting businesses is not always very steady. It goes up, it goes down, and you need to be able to be in a position to react to what’s going on. With Covid-19 for example, we had a lot of vehicles we had to park up, and we were able to send an element of our flexible rental back to our suppliers.” 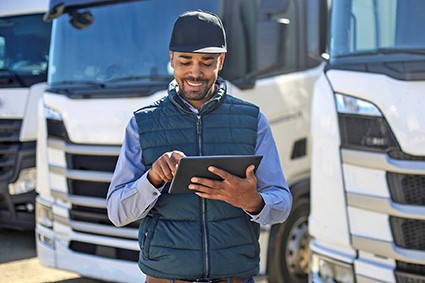 Outright purchase, as in 2019, is the most used funding method for trucks/HGVs, with 45% of Fleet200 respondents selecting it as a funding mechanism.

Operating lease is used by 29% of fleets, 14% use finance lease and 13% employ flexible rental.

The buying of trucks is most popular in the Public Sector organisations with 68% of fleets in this category using it, followed by Primary, Manufacturing and Construction (38%), and Transport, Wholesale, Retail, Distribution, Information and Communication (13%), and Business Services (10%).

Of the fleets with 100 or more trucks, 45% use outright purchase as their main funding method, with 35% favouring operating lease. Finance lease accounts for the remaining 20%.

In contrast, of the fleets with 99 trucks or fewer, 50% used outright purchase as their only or major funding method, followed by operating lease (33%) and finance lease (4%).

Countryside Properties has put the driver at the heart of its new approach to fleet management.