Fines and charges accelerate to close to £56m, say the FN50

Fines and charges incurred by drivers of FN50 vehicles are reaching record levels. The suggestion is the total bill could be almost £56 million.

The FN50 survey asked leasing companies to report the number of charges and fines for speeding, parking, the congestion charge and other contraventions, including the amount.

It is difficult to compare like-with-like with previous years as not all the same companies reveal the information for each fine category.

Nevertheless, the previous year’s 670,000 charges, with a combined value of almost £20m, came from data supplied by 26 companies. This year’s data came from almost half that number, suggesting a substantial year-on-year increase.

Taking into account average figures and risk fleet weighting, analysis of the FN50 suggests the total number of fines and charges incurred could be as high as 1.8m, with a combined value of £55.9m.

The combined value of £9.6m reported by 15 leasing companies also suggests there is an upward trend when compared with the £11.4m recorded by 19 firms in 2017.

Furthermore, the experience of individual companies appears to tally with the overall picture, with some firms reporting double-digit increases in the number of parking penalties they have received.

The RAC Foundation reported in July that councils in England are on course to generate a combined ‘profit’ of £885m in 2018/19 from their parking operations – a 13% increase year-on-year.

“Private car parks accounted for three-quarters of the value of all parking fines, which came to a total of £2.2m, compared with the £0.77m collected in charges from public parking.”

Top five leasing firm Alphabet also reported a rise in parking penalties. Ashlee Lanchbery, its fleet administration manager, explained: “Between 2017 and 2018, we’ve seen an increase in the amount of fines being incurred on our fleet. This has been primarily from private parking charges being incurred by drivers.

“We believe this is because of a number of factors, such as the rise in enforced private parking spaces over the past few years as the cost of number plate recognition and camera technology comes down and as parking space in our towns and cities gets increasingly scarce.”

Lanchbery added: “It’s not helped by inconsistent signage for drivers and conflicting information out there in the public domain regarding the enforceability of private parking charges and whether drivers are liable to pay them or not.”

Data from other sources also appears to support the FN50 analysis and the experience of individual leasing firms. 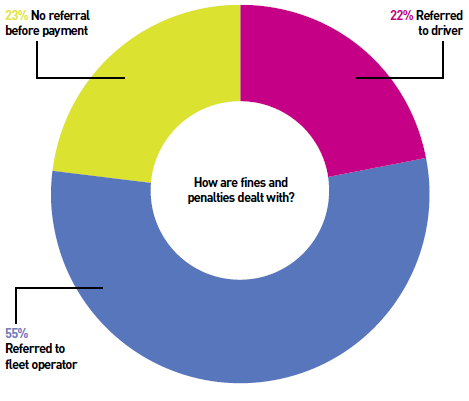 The RAC Foundation reported in July that councils in England are on course to generate a combined ‘profit’ of £885m in 2018/19 from their parking operations – a 13% increase year-on-year.

Furthermore, from April to July, during the first quarter of the 2018-19 financial year (the latest figures available), private parking companies requested 1,479,152 sets of vehicle keeper records from the Driver and Vehicle Licensing Agency (DVLA).

The data is used by firms to pursue motorists for charges and penalties they say are due for infringements in private car parks such as those at shopping centres, leisure centres and motorway service areas.

Steve Gooding, director of the RAC Foundation, said: “Numbers like these suggest that something, somewhere, is going wrong.”

However, help could be at hand. East Yorkshire MP Sir Greg Knight has a private members’ bill before Parliament, which aims to introduce a single, Government-sanctioned code of practice all parking firms will have to adhere to if they want to request DVLA information.

Ultimately, better education of drivers over where they can park their vehicles and for how long would remain the most effective weapon in bringing down costs.

Company car and van drivers are also falling foul of road traffic laws in other areas.

Lex Autolease reported that the percentage of drivers caught by bus lane cameras rose by 37.9% in the first half of the year compared with the same period in 2017, with the proportion fined for junction box, red routes and other similar infringements up by 17.9% over the same period.

ALD Automotive, which has handled 30,000-plus parking tickets in the past year, also highlighted an increasing number of drivers fined for using bus lanes.

Phil Turle, ALD Automotive operations manager for fleet services, said: “There has been a marked increase in the number of bus lane fines, up 28% in volume for bus lanes outside London, and a year-on-year increase of 15% in parking fines.”

In terms of speeding contraventions, 18 firms said they dealt with a combined 114,117 tickets. The value of speeding fines incurred was reported by just eight leasing companies and was worth a combined £154,332.

At Lex Autolease, Mason said: “The percentage of drivers committing more serious endorsable offences has increased at a much slower rate.

“The proportion of penalties that were for speeding, using a mobile phone behind the wheel and dangerous driving rose by just 6.6% in the first half of 2018, accounting for just under a quarter – 23.5% – of the total number recorded.”

Lex Autolease also saw a 32.5% year-on-year decrease in the percentage of drivers incurring a congestion charge, in the period between January and June 2018.

“As with existing road tolls, communication with drivers is critical. Even now, many people still get caught out. That’s why it’s so important public and fleet awareness campaigns take place ahead of next April next with the implementation of the London ULEZ and before 2020 for the planned clean air zones." Ashlee Lanchbery, Alphabet 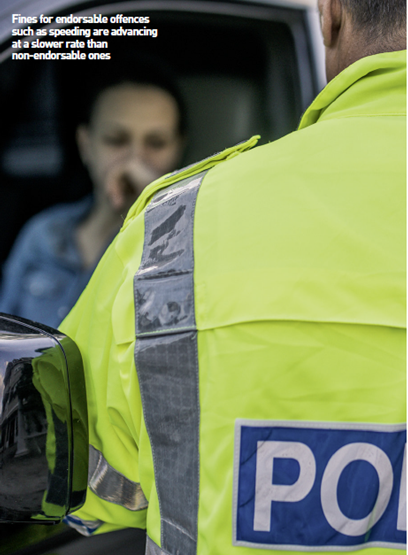 The £10 ‘Toxicity Charge’, also known as the Emissions Surcharge or T-charge, operates on top of, and during the same operating times as, the congestion charge.

From April 2019, the world’s first ultra-low emission zone (ULEZ) will replace the T-Charge and operate in the same area, alongside the congestion charge, with some leasing firms concerned that this and other clean air zones (CAZs) could result in further charges and fines (see panel overleaf).

Meanwhile, in terms of other charges, such as the Dart Charge, FN50 figures suggest more company car and van drivers are falling foul of the rules.

Lanchbery said: “With the increasing number of toll-based services around the UK – whether it’s the Dart Charge, Mersey Tunnels, M6 or London – we’re also seeing increases in fines from these areas as drivers who don’t know the area are unaware of the restrictions, or assume their vehicle is exempt or even think that the fleet has pre-paid them.”

More than half of firms (55%) referred fines and charges to the fleet customer, while 22% were sent directly to the driver and 23% were not referred before being paid.

Mason said: “It is important that we process them promptly so that the necessary information can be shared with customers and each issue can be resolved appropriately.

“The key is to separate notifications into those that do and don’t require an admission of liability, so that it’s clear whether there is a simple fine to pay, or whether additional penalties such as points need to be applied.”

Lex Autolease reported an 18.4% year-on-year increase in the number of company car and van drivers on its fleet who incurred penalties in the first-half of 2018.

The total bill for the UK’s largest leasing company came to £7m from January to June – an increase of 24.8% on the same period last year.

Mason concluded: “There is a greater need for improved education and training to raise awareness of the rules of the road, so that drivers don’t get caught out.

“There are straight-forward driver policies and procedures that businesses can put in place to help reduce the risk and bring down the bill.” 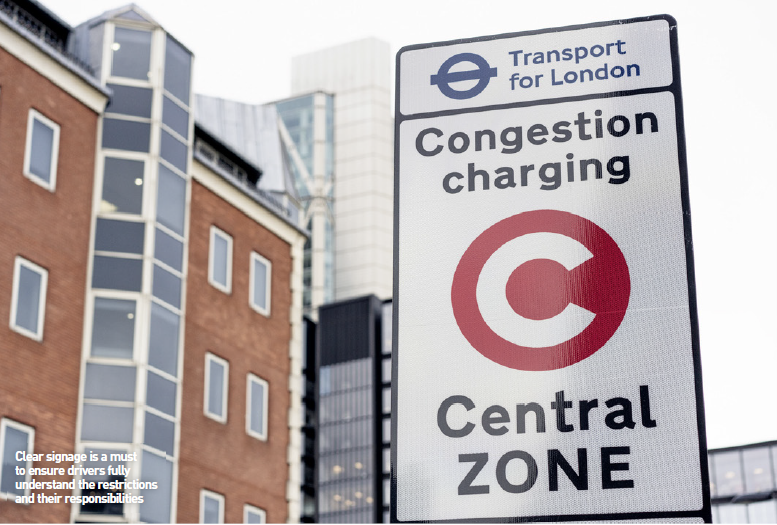 FN50 leasing companies are braced for a potential wave of fines and charges from new restrictions being placed on vehicles entering towns and cities across the country.

It is unclear how many councils may opt to introduce a clean air zone (CAZ) that charges drivers.

If approved by Government, both schemes would come into force from January 2020.

Others, including Cambridge, Bristol and Bath could follow suit, while London’s ULEZ, which will target cars, vans and trucks that don’t meet the latest emission standards, will be introduced from April 2019.

London’s ULEZ will affect thousands more vehicles than the existing T-charge, up to 60,000 every day, compared with the current estimated 6,500.

Alphabet’s Ashlee Lanchbery said: “As with existing road tolls, communication with drivers is critical. Even now, many people still get caught out. That’s why it’s so important public and fleet awareness campaigns take place ahead of next April next with the implementation of the London ULEZ and before 2020 for the planned clean air zones.

“Consistency and clarity of signage in London and around the UK is also vital to help drivers understand their responsibilities.

“However, with any change, I’m sure some drivers will get caught out so we’re working with fleet managers to help spread the message of the upcoming changes over the next 12-18 months.”

Lex’s Guy Mason concluded: “The introduction of the new charges will increase the number of fines we deal with, as we’ve seen in the past with Mersey Flow and the Dart Charge. But, as has been the case with the congestion charge, schemes on this scale do have the potential to positively change driver behaviour long-term.”