Pure electric makes up just 0.8% of the fuel mix across the FN50 with plug-in hybrid vans accounting for 0.1% (up from 0.3% pure electric last year).

RCI Financial Services, the in-house finance company for Renault and Nissan, has the second highest number of EVs (322) and the highest proportion of its van risk fleet (9.5% of 3,403 vehicles).

Alphabet (GB) is the next largest operator of pure electric vans (160 or 0.9% of its van risk fleet of 18,146 vehicles) and has recently added the Renault Kangoo ZE to its corporate car sharing service, AlphaCity.

Alphabet (GB) CEO Nick Brownrigg says “ease of use for business” is one of the principal challenges in the uptake of electric vehicles.

“Until charging an EV is as easy as filling a fuel tank, charging will still be a significant practical barrier for many people to overcome,” he says.

Charging a fleet of electric vans can be a challenge if the depot they are kept at doesn’t have sufficient electricity supply and requires an expensive sub-station. Conversely, if a driver takes their van home, but doesn’t have off-road parking, charging is also a problem.

Steve Winter, head of fleet at British Gas, which has 60 pure electric vans on its fleet of 12,000 vans, says: “Our problem is the engineers take the vans home, we have no depots, so every engineer that has electric or plug-in hybrid has to have a charge point fitted at home and some of them live in a block of flats so we’ll never, at this moment, have a 100% electric fleet. It will change when the range improves and you are able charge once a week.” 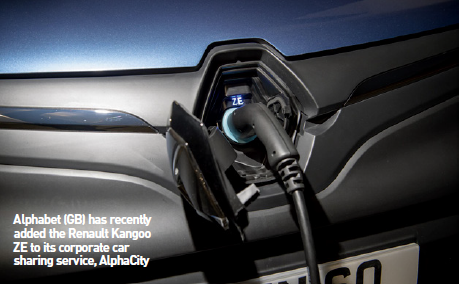 Natasha Bellwood, category manager at Southern Water, which has a fleet of 1,150 cars and commercial vehicles, is being challenged by her executive leadership team to look at EVs to demonstrate its environment credentials to customers but “our operating model at the moment isn’t conducive to electric vehicles”.

“You might identify a van that is doing 20-30 miles, great, that suits the range. But you’re paying a premium just to have the electric title,” she says. “We’ve got a lot of kit on the back of the vans as well so you put on weight and the range depletes.”

Arval UK managing director Miguel Cabaça agrees: “Specifically for vans, there are practical challenges with EV adoption, particularly around payload limitations and the speed at which vans lose range when laden. This means the applications plug-in vans are suitable for are quite specific.”

As a result of these factors, diesel is still the dominant fuel choice for van fleets, although its share has dropped from 99% last year to 96% this, with petrol making the greatest gain (accounting for 2.7% of the fuel mix, up from 0.4%). 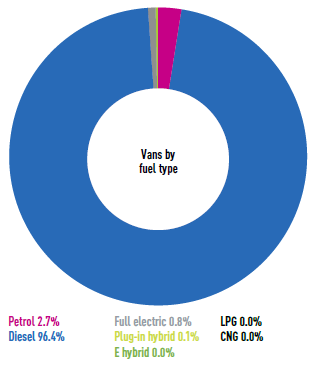 This may be due to operators choosing to replace ageing diesel vans with Euro 4 petrol rather than stumping up for more expensive Euro 6 diesel vans to comply with forthcoming clean air zones in cities.