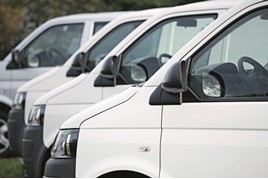 Economic uncertainty and potential air quality restrictions have created a challenging funding environment for vans over the past year.

Contract hire retains its dominant funding position, responsible for 90% of the FN50’s 430,000-plus funded vans. After losing some its lustre 12 months ago, when it dipped to 88%, the financing method has returned to the same level as 2016.

Finance lease levels meanwhile, have remained fairly stagnant, with 9% of the van fleet funded this way in 2018, down on the 9.6% reported last year, but up on its 8.6% market share in 2016.

Seventeen leasing companies reported a van risk fleet financed solely via contract hire, while there were just three where finance lease was the dominant funding method.

“Amid fast-paced technological and regulatory change, decision-makers want to retain flexibility and make sure they get the right van for the right job.”

Alphabet reported contract hire was also the dominant financing method for its van fleet, responsible for 75% of its 18,000-plus vans, but it also says finance lease as a funding choice has been playing a growing role. 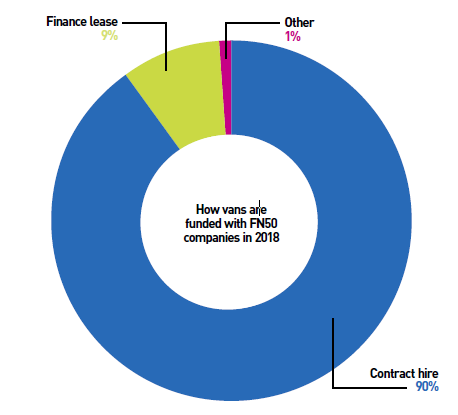 Rebate when vehicle is sold

Here, the fleet makes payments that cover the cost of the vehicle, possibly including a final balloon payment, and gets a rebate on the rental when the vehicle is sold, either by them or the leasing company. The better the resale price, the higher the rebate.

“Finance lease is definitely a more popular option for vans than it is in the car market, with just under one quarter of our van contracts taking this option, compared to only around 13% for cars,” says Clive Buhagiar, head of commercial performance at Alphabet (GB). “And, although we saw a reduction in finance lease contracts as a percentage of our commercial fleet between 2017 and 2018, taking a longer view we’ve seen a one-third increase over the past four years in the number of commercials being funded through finance lease.”

Flexible terms are also becoming more popular, as customers flex their fleet according to demand. Simon Cook, light commercial vehicle (LCV) leader at Arval, explains: “We have seen fleets starting to make increased use of medium-term rental, often to scale up for specific contracts and seasonal peaks in demand.

“We see this as a future growth area, providing flexible fleet provision that is more cost-effective than traditional short term rental solutions.”

Indeed, traditional daily rental firms have been offering an increasing number of vehicles via flexi-rent terms for a number of years, with some offering livery and wrapping services.

There may have been growth in short-term products among FN50 operators, but the average replacement cycle was almost four years, at 46.2 months. Average mileage was 80,371 miles.

Alphabet’s van fleet, on average, is replaced every 48 months/71,000 miles. Buhagiar says: “Last year we saw a reduction in the van replacement cycle, but the data for 2018 for Alphabet is in line with 2016 and 2015, suggesting that the van market is well established and consistent.”

Cook also reported “no fundamental change in cycles, with 48-60 month contracts becoming the norm” at Arval. However, he says: “There are more extensions beyond renewal dates as operators consider the many issues affecting LCV operation, such as clean air zones (CAZs).

“They are keen to understand the potential impact before making vehicle selections and taking some time to ensure that decisions are future-proofed can be a prudent investment.”

It could go some way to explaining why 36% of vans were returned late, compared to 57% on time and 7% early.

Cook says: “Vans often fall into two distinct camps regarding return dates. Some fleets are keen to embrace latest changes in powertrain technology and emissions standards, while others are holding onto older vehicles while they assess the options available to them against a backdrop of rapid change.”

It is unclear how many councils may decide to introduce a clean air zone that will charge drivers.

Birmingham City Council’s ruling cabinet has approved plans to charge all but the cleanest cars and vans. Leeds favours a charging system for non-compliant buses, coaches, HGVs, taxis and private hire vehicles (pre-Euro 6 diesel and pre-Euro 4 petrol). If approved by Government, both schemes would come into force from January 2020.

Others, including Cambridge, Bristol and Bath could follow suit, while London’s ultra-low emission zone (ULEZ), which will target cars, vans and trucks that don’t meet the latest emission standards, will be introduced from April 2019.

London mayor Sadiq Khan has also announced plans to extend the ULEZ to an area 18 times larger than the original zone by October 25, 2021.

How prepared fleets are for the changes has been called into question. A survey from the British Vehicle Rental and Leasing Association (BVRLA) suggested that four in 10 small- and medium-sized businesses are unaware CAZs will start in towns and cities across the UK as early as next year.

It also revealed that more than a third were unaware that air quality restrictions are likely to involve charges for all but the most modern and least polluting diesel vehicles.

In another survey, this time from BT Fleet Solutions and The AA, a third (34%) of fleets said they had no strategy in place to deal with councils introducing charges, while more than half (51%) say they have vehicles that are not compliant with the latest emissions standards.

Adams says: “The shift towards low emission vehicles, implementation of CAZs and the prospect of updated Euro emissions standards are all increasing the demand for expert consultancy. As a result, we’re also seeing an increase in fully outsourced solutions, so decision-makers can always access specialist experience and knowledge.”

In the coming months, further clarity on clean air zones may bring forward renewal dates for non-compliant vehicles, while business will be hoping for greater economic certainty in a post-Brexit Britain.

Van registrations, a barometer of the UK economy, decreased last year and were 3% down in the first  nine months of 2018.

The new LCV market declined by 3.6% in 2017, according to the Society of Motor Manufacturers and Traders (SMMT).

The trade body reported it was the market’s first decline since 2012, but with 362,149 LCVs driven off forecourts in the year, demand was still at its third highest in a decade.

Adams expects a potential boost to sales, with fleets eager to adopt the lowest-emitting models to operate in towns and cities.