An independent test has found that 98% of cars could not match or beat official miles per gallon (mpg) figures with the Mitsubishi Outlander PHEV the worst performer.

The Outlander PHEV's mpg was found to be overstated by 120%.

RAC Business spokesman Simon Peevers said: “Businesses will be rightly concerned that the mpg figures highlighted in these tests are so wide of the mark as it suggests the current procedure is clearly not reflective of real world driving.”

Research carried out during Q1 among 1,000 business decision-makers by RAC Business showed that fuel economy was the top priority when acquiring new vehicles for almost half, 44%, of those surveyed.

“That decision will be heavily influenced by the mpg stats issued by manufacturers and could even impact on budget forecasts for fuel if they can’t make the numbers, or anywhere near what’s been claimed,” continued Peevers.

“This is not good for either business drivers, fleet managers or the manufacturer and therefore needs to be rectified as soon as possible.”

The official test used by carmakers has been labelled outdated, with a number of loopholes that lead to unrealistic figures that don’t accurately reflect real-life scenarios, such as motorway driving.

For example, manufacturers can increase tyre pressures above the recommended levels to reduce rolling resistance.

However, the EU says it wants to replace it with a much more stringent procedure, which will better reflect real-world fuel economy figures, by 2017.

Which? executive director Richard Lloyd, said: “The new test should be brought in without delay so consumers are no longer misled by fantasy mpg figures."

Mitsubishi has responded to the findings, labelling the current test regime for emissions and fuel consumption "outdated".

Lance Bradley, managing director at Mitsubishi, said: "The current test regime does the industry no favours.” 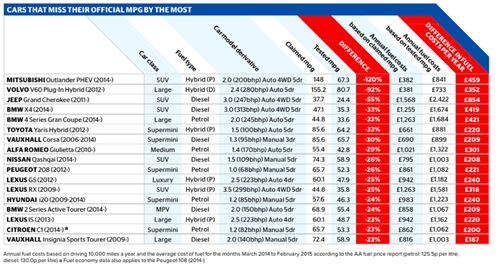