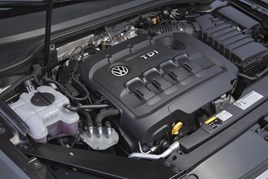 Volkswagen Group brands in the UK - VW, Audi, Skoda and Seat - have told fleets they currently can't guarantee the CO2 emissions of certain vehicles with quoted figures being labelled "provisional".

Fleet News has seen emails from fleet directors to customers with lists of vehicles for which emissions and consumptions may be subject to change - mostly vehicles from 2015 or 16 model years (view the full listing here).

This follows last week's announcement that some 800,000 vehicles may have higher CO2 emissions than stated.

Writing to Volkswagen customers, head of fleet Michael O'Shea said: "We want to make it clear to you that it may be necessary to publish revised, and potentially increased, values in the near future."

Vehicles that may be affected are predominantly diesel, with 1.4, 1.6 and 2.0-litre TDI units included on the list, as well as the 1.4 TSI petrol engine.

There appears to be no crossover with vehicles affected by the diesel emissions issues that emerged in September.

Volkswagen, Skoda, Audi, and Seat have all updated website footers with the line "Our CO2 and consumption values are provisional and are currently under review. Revised values will be published if necessary."

Meanwhile, Volkswagen Group has informed the Transport Select Committee that some vehicles affected by the diesel emissions scandal will have to wait until late September to have vehicles rectified - a year after the news broke.

For further analysis and what this may mean for fleets in terms of tax and residual values, see the next edition of Fleet News.

Will you order a Volkswagen, Audi, Skoda or Seat with provisional CO2 figures? Vote now in our poll.