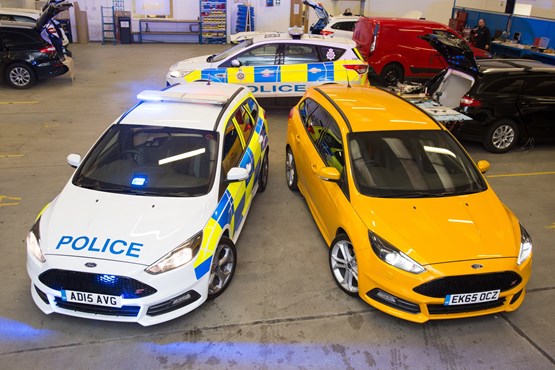 Ford is to supply 1,100 vehicles to UK police fleets from this year as part of wins in two group buying tenders.

The UK’s northern consortium of 22 police forces, led by West and South Yorkshire Police in a deal set to save £5m, ordered 680 Ford models, including 120 Kuga SUVs and 560 Transit Custom medium vans.  Half of the Transit Customs will be supplied by Ford as cell vans, converted by its Special Vehicle Preparation (SVP) operation into a vehicle capable of securely transporting two detainees, accompanied by up to five police officers.

Ford Kuga and Transit Custom vehicles will also be supplied to the country’s southern consortium, which includes six fire services as well as 28 police forces in a deal that also led to the supply of 2,000 new Vauxhall Astra beat cars.  They also added 110 Ford Transit Connect light vans and 30 Ranger pick-ups to the 80 Kugas and 200 Transit Customs which made up their Ford order.

“The stylish and capable Ford Kuga has established itself as their rural beat car of choice with all-important all-wheel drive necessary for winter conditions.”

British Transport Police, South Wales and Dyfed Powys already operate Kugas on fleet, while the Ford Transit Custom is used in every police region in the country, with roles as cell vans, crime scene units, dog carriers and camera vans.