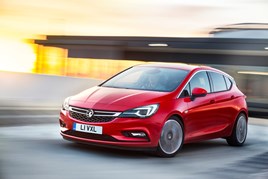 The new Vauxhall Astra has been named best lower medium car at the Fleet News Awards.

Announced at an awards ceremony at the Grosvenor House Hotel in London, the Astra topped its extremely competitive category.

The judges, made up of influencial decision-makers and journalists within the fleet industry, praised the model for its efficiency, running costs and technology. This year has already proven to be a positive year for the model, with this award the latest in a list that also includes a Family Car category win at the What Car? Awards and being named European Car of the Year.

The Fleet News Awards judges said: “The new Astra has made a huge leap forward over the previous model. Highly competitive on running costs, emissions and fuel efficiency, it is packed with technology that has been designed with fleet and driver needs in mind. It ticks all the rational boxes but will also attract drivers. It is Vauxhall’s most appealing model for a generation.”

“We’re delighted the Astra has been recognised at the Fleet News Awards, as the fleet market is an important sector for the all new Astra,” said James Taylor, Vauxhall’s fleet sales director.

“It’s great to see how well-received it has been so far by both our customers and the media.”