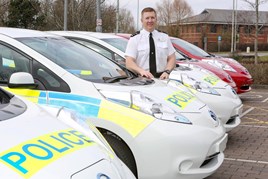 The police force currently has 412 vehicles with 89.32% run on diesel and the remaining 10.68% on unleaded petrol.

“The police are big car users with the vast majority of its fleet currently running on diesel engines. I believe the police can, and should, make an important contribution to reducing emissions by using cleaner vehicles.”

The vehicles have been supplied by Wessex Garages on Mercia Road, Gloucester.

Andy Provis, group fleet manager at Wessex Garages, said: “We are delighted that Gloucestershire Constabulary have invested in seven of Nissan’s 100% electric Leafs. There are many benefits of switching to an electric vehicle such as the low running costs and, of course, the environmental aspects.

He added: “The practicality of the Leaf is really drawing people to make the purchase and we are pleased to see that the Gloucestershire Constabulary is leading the way within the UK police force.”