The UK’s new car market grew by 5.3% in March, with fleet and business registrations accounting for 49.4% of the market, according to figures published by the Society of Motor Manufacturers and Traders (SMMT).

Private sales accounted for more than half of the market, with 262,215 registrations compared to 256,492 fleet and business registrations.

It was the biggest ever month since the bi-annual plate change began in 1999, and only the third time the market has surpassed half a million units in a single month.

Fleet and business registrations as a share of the overall market was up when compared to March 2015, when 240,122 units were registered, equating to 48.7% of the market.

Mike Hawes, SMMT chief executive, said: “Strong growth in March rounds off a robust first quarter as British consumers continue to demonstrate their appetite for new cars, especially ultra-low emission vehicles. This confidence should see registrations remain at a high but broadly stable level over the year, but could be undermined by political or economic uncertainty.”

Demand for alternative fuel vehicles showed a notable increase of 21.5% in the month, as consumers continued to favour lower emission vehicles with lower running costs. Registrations of both diesel and petrol cars increased, meanwhile, with respective uplifts of 4.8% and 4.7%.

Growth was seen across all sales types in March: private and business registrations increased 3.8% and 15.3% respectively, while in the fleet sector demand grew 6%, reversing small declines seen in January and February as buyers sought to maximise residual values by opting for the new March number plate.

Derren Martin, senior editor at Cap HPI, said: “It was particularly interesting to see the recovery in the fleet sector with demand growing by 6%, having struggled in January and February.

“How the industry copes with increasing volumes of vehicles returning to the market, particularly from ‘tactical registrations’ via pre-registrations and short-cycle daily rental channels, will underpin the stability of the used market.

“Cap HPI has reported the strength of the market through the first quarter of this year. We are seeing this bullish market reflected in new registrations, used demand and dealer sentiment. Continued strong consumer demand will be the key factor to underpin residual values over the coming months, as record volumes of vehicles return to the market.”

The company undertakes a monthly survey of dealers and reported 32% of dealers, indicated that they had seen an increase in finance penetration. More than half the respondents claimed that the current trade prices are too high.

Adding to this is the pressure on margins, and signs that there is a reluctance from consumers to absorb increased forecourt prices.

Martin continued: “There will also be an abundance of late-plate cars appearing in the market over the next few months, indeed “16” plates were already being advertised on popular used car websites from the early days of March.

“Concerns around oversupply do need to be tempered with the fact that retail demand for used cars remains healthy – consumers are still actively buying, interest rates are low and the economy remains strong.”

Rupert Pontin, head of valuations at Glass’s, said: “It is very interesting to see that new car registrations have seen another healthy increase of 5.3% on the same period last year bringing the YTD uplift to 5.1% against a Glass’s full year prediction of 3%.

“With anecdotal feedback from franchised dealers suggesting a double digit percentage of these are pre-registered vehicles, consideration must be given to the view that the manufacturers are working to bring volume forward to the first half of the year in a bid to avoid any stagnation in the market as a result of the EU referendum in June and subsequent possibility of a Brexit.

“It is also great to see that the volume of AFV’s is increasing rapidly as this is essential to help the UK market meet European emission commitments in the coming years.

“Actually reviewing what is being sold is very important, and it is vital to remember that this sector of the market will be further enhanced as EV technology is both fully understood by the customer and tested in the market. Range remains the key, specifically for all electric vehicles and with volumes ever increasing, development of used car customers will be critical.” 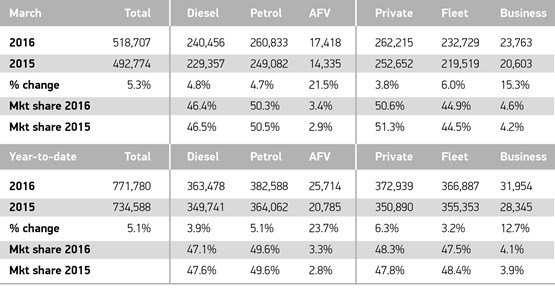