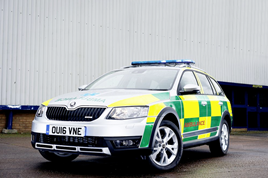 Success in the bluelight sector, a revitalised Superb and a revamped dealer network are helping Škoda to a new fleet sales record this year.

The company appears to have weathered the storm following the Volkswagen Group emissions scandal.

Movassaghi said: “Sales have been really strong, despite the fact that we haven’t pushed the brand in the popular SUV sector so far.

The new Superb saloon and estate have put Škoda up 150% in a segment down 16% so far this year. Most models have been sold in the premium SE-L and L&K specifications, said product marketing manager James Snowden.

A new Superb Sportline will be launched later this year – slotting between the two specifications – to cash in on the appetite for the more expensive models.

Škoda has also been strengthening relationships with bluelight services and building new ones, according to head of sales operations John French.

He said: “We have recently done a lot of work with West Mercia Police with vehicles which have gained RoSPA approval. We’ve also developed finance options which allow bluelight services to buy versions of the Octavia Scout and Octavia Estate on finance.”

French told Fleet News that the Octavia Scout had done particularly well with paramedics and also with district nurses located in the Highlands.

“They need its mix of space and four-wheel-drive, and the Octavia VRs has been used by a few police forces for undercover, unmarked work,” he said. “We want to be a one-stop shop for the bluelight services, providing the vehicles to them ready-converted and good to go.”

Next year, Škoda will also start to benefit from sales in the growing SUV market – which has grown by 214% since 2010 – when it launches the Kodiaq seven-seater in Q1 followed by an all-new Yeti a year later.

The company’s sales ambitions will continue to focus on the fleet sector; in 2015 its retail-to-fleet mix was 47:53.

French, who told a press briefing in London that Škoda’s true fleet sales grew by 24% in 2015 – resulting in a market share of 3.1% – said that the 128-strong network of retailers would continue to work hard to generate relationships with SMEs.

Škoda has eight regional fleet managers but will be encouraging retailers to recruit their own business development managers to manage non-retail sales in future.

French added: “The fleet target for this year will be to continue the growth we have enjoyed over the past seven years and to maintain the 53% fleet mix.

“Our team of eight fleet managers has been working hard to secure business of all sizes. The Fabia, Octavia and Superb are winning accolades across the industry, but we are also developing things for ourselves.”

French also revealed that the existing Octavia SE Business would soon be replaced by an Octavia SE Technology,  with a focus on a low P11D and specific offers for existing fleet customers.