Manufacturers to focus investment in low carbon or EV technology 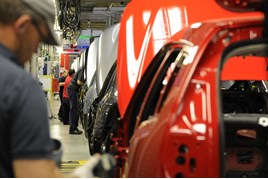 The UK automotive industry remains resilient despite ongoing uncertainty presented by the global economy and the UK’s future relationship with the EU, according to new research released by Lloyds Bank Commercial Banking.

Lloyds Bank’s third annual survey of the UK automotive manufacturing sector and its supply chain analyses the state of the industry today and the opportunities and challenges it faces in the future.

Almost four in ten businesses (39%) expect growth to come from new product development. While some plan to support growth by investing in infrastructure (22%) and pursuing mergers and acquisitions (20%), this fell back significantly on last year, from 43% and 35%, respectively.

The weakness of sterling is also a challenge for manufacturers with more than a quarter (26%) identifying it as a potential issue. However, more than a third of businesses (34%) expect to benefit from a more competitive export environment.

These job creation plans are underpinned by manufacturers’ reshoring activity. The last time the research was carried out 58% of firms said they planned to bring some manufacturing back to the UK within two years, growing to 64% in the latest report.

Technological innovation will continue to shape the sector over the coming years. Much of this innovation is to help cut vehicle emissions, addressing the fact that 62% of firms thought the 2015 emissions issue had a negative impact on consumer confidence.

UK manufacturers’ commitment to innovation has increased, with firms planning to invest an average of 24% of current turnover into R&D over the next two years, up from 17%.

Firms say this is due to manufacturers’ reinforcing their plans to upskill their staff or change their processes to develop low carbon or electric vehicle technology. This is being pursued by 64% of firms, up from 52% last year.

In particular, 57% of respondents said they had already made moves to develop driverless technology despite the field increasingly being occupied by new competitors such as Google, Apple and Uber.

David Atkinson, UK head of manufacturing at Lloyds Bank Commercial Banking and report co-author, said: “The automotive industry remains the UK’s largest manufacturing export sector with a national supply chain and a presence in every UK region. This report highlights an industry looking to the future, eager to put any uncertainty generated by the EU referendum behind it.

“Encouragingly, job creation is forecast to hold firm over the next two years. However, much rests on the nature of the UK’s future trading relationships with some firms continuing to put plans on hold as they await the full details of Britain’s exit from the EU.

“As the industry continues to experience its biggest period of transition for a generation, Lloyds Bank is well placed to support the sector’s plans and investment in new technology, as part of our Helping Britain Prosper plan.”