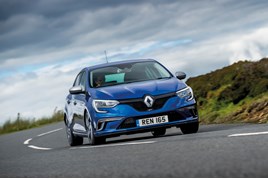 The hatchback is capable of 0-62mph in 8.8 seconds with a top speed of 133mph. It offers official combined fuel economy of 61.4mpg with CO2 emissions of 120g/km.

At speeds of less than 50mph in sport mode and 37mph in other modes the front and rear wheels turn in opposite directions, by up to 2.7 degrees at the back, giving the GT increased manoeuvrability.

At higher speeds the front and rear wheels steer in the same direction, turning by up to 1 degree at the back, for greater stability. 4Control calculates the angle of the rear wheels 100 times a second and adjusts them as necessary.