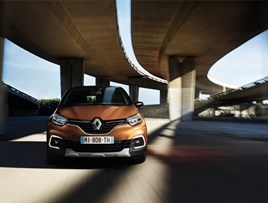 Renault has added a new dCi 90 engine with automatic transmission to the new Renault Captur line-up.

Renault says the 1.5-litre dCi 90 EDC is compact, light, smooth and flexible, and has been optimised for the day-to-day conditions experienced by compact crossover owners, thanks to the use of a dual dry clutch combined with electric actuators.

The transmission provides reassuringly smooth, yet fast gear changes, responding instantly to driver demands. The EDC transmission is also available with the TCe 120 engine in the Captur range.

Captur dCi 90 EDC has fuel economy of up to 72.4mpg (NEDC combined) and CO2 emissions as low as 101g/km, in Dynamique Nav specification.

The Renault Captur was Europe’s best-selling B-segment SUV in 2016, with sales of 215,670. Captur was also Renault’s best-selling vehicle in the UK in 2016 with 25,841 sold. Captur sits alongside the rest of Renault’s crossover line-up of the recently-launched Koleos large SUV and the Kadjar family-sized crossover. The New Renault Captur range is available from £15,615.

Renault has announced UK pricing and specifications for the new Renault Captur following its global debut at the 2017 Geneva Motor Show.

Renault plays it safe with a low key mid-life facelift on the Captur, but will it maintain its UK best-seller status?

Renault has added a new 165PS petrol engine and CVT gearbox to its Kadjar crossover line-up.