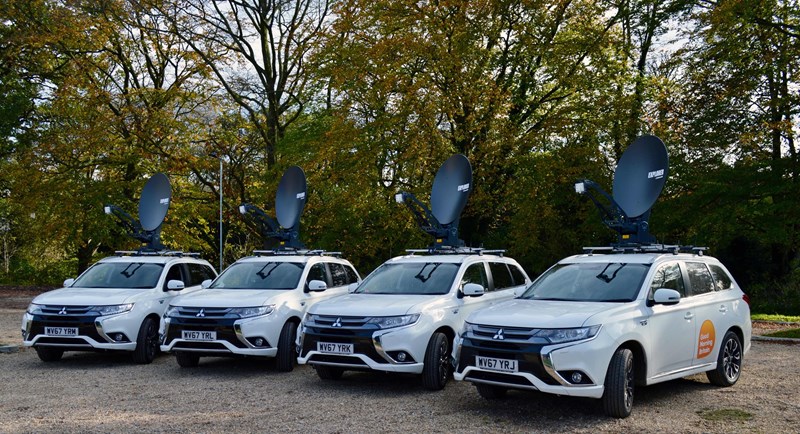 ITV is using a specially-converted fleet of four Mitsubishi Outlander PHEVs as Outside Broadcast vehicles for its Good Morning Britain and This Morning programmes.

The Outlanders are ITV’s first hybrid vehicles and all have been tailored to its bespoke specification by Mitsubishi Special Vehicle Operations (MSVO).

ITV also believes the vehicles are the first of their size and type to be equipped with an auto-pointing satellite dish, which works to detect and pull an internet signal into the on-board transmission equipment in areas where there is weak or non-existent coverage.

Tim Guilder, technology manager, ITV Studios Daytime, said: “With ITV Studios Daytime requiring its own mini fleet of Outside Broadcast vehicles and with us keen to develop the more efficient ‘Sat Car’ concept, the Mitsubishi Outlander PHEV was the perfect choice.

“At initial discussions we did consider rival hybrid vehicles, but the Outlander PHEV really stood out and we knew it would be able to handle all our kit and the challenging driving conditions that our crews sometimes face. Also, only Mitsubishi really understood what we wanted to achieve and had the in-house resources to perform our essential modifications.”

Lance Bradley, managing director, Mitsubishi Motors in the UK, said: “We are exceptionally pleased that ITV has shown its confidence in the dependability and capability of the Mitsubishi Outlander petrol/electric PHEV with its use in such an important role. Together with the emergency services, Highways Agency and various leading utilities providers, ITV is another well-known organisation to recognise and benefit from the expertise of our unique in-house conversion division.”

The Mitsubishi Outlander plug-in hybrid remains the most common ultra-low emission car on the road, according to DVLA data.

Mitsubishi has announced the Outlander Keiko – a special edition version of its all-wheel drive SUV, priced from £27,999.

The Mitsubishi Outlander plug-in hybrid has extended its lead to remain the most common ultra-low carbon car on the UK's roads.