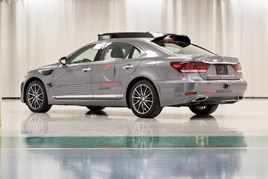 Developed by the Toyota Research Institute (TRI) and named ‘Platform 3.0’ it demonstrates how autonomous driving technology and equipment can be better integrated into a vehicle’s design.

“To elevate our test platform to a new level, we tapped Toyota’s design and engineering expertise to create an all-new platform that has the potential to be a benchmark in function and style.”

The vehicle has a sensor-rich package that makes it one of the most perceptive automated driving test cars on the road.

It uses four high resolution LIDAR scanners which can detect objects in a 360-degree perimeter of the car.

Shorter-range LIDAR sensors are positioned low down on all four sides of the vehicle: one in each front quarter panel and one each on the front and rear bumpers. These can detect low-level and smaller objects near the car, such as children or debris in the road.

In order to conceal the sensors and cameras a new rooftop weather and temperature-proof panel makes use of the space in the sunroof compartment to minimise overall height and negate the need for a roof-mounted spinning sensor.

The computers needed to operate the automated vehicle components have been condensed into a small box, previously they took up most of the boot space.

Production of Platform 3.0 vehicles will begin in the spring with some vehicles  assembled with a dual cockpit control layout. This arrangement is used to test TRI’s Guardian approach to automated driving, experimenting with methods for transferring vehicle control between the human test driver and the automated system while having a safety driver in place as a back-up.

The UK's largest on-road trials of connected and autonomous vehicles have begun in central Coventry.