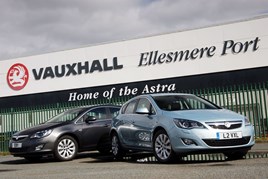 Groupe PSA is to work with the Unite union to 'rebuild the industrial performance of the Vauxhall factories in the United Kingdom in a reasonable manner’ following a meeting between the two organisations.

Earlier this month, it was announced that a further 250 jobs would be cut by Vauxhall at its Ellesmere Port plant on top of the 400 jobs it announced in October to “accelerate the recovery of plant productivity”.

A statement from Groupe PSA says Len McCluskey, general secretary of Unite, and Carlos Tavares, chairman of the managing board of the Groupe PSA, have now met to discuss the issue.

It added: “The meeting with Mr McCluskey was an opportunity to establish a frank and constructive dialogue in order to study how to regain the competitiveness of the Vauxhall manufacturing sites in the United Kingdom in terms of cost/quality performance, in the context of an unstable economic environment.

“Carlos Tavares proposed to implement the principle of co-construction with the Unite union, in order to define a roadmap to rebuild the industrial performance of the Vauxhall factories in the United Kingdom, in a reasonable manner.

“Mr Tavares emphasised that, among other stakeholders, the Unite union's support for this process is essential to rebuild the Vauxhall industrial footprint, to make it progress and to ensure its sustainability in the new context of the Groupe PSA.

“Further meetings are planned to quickly move this recovery plan for Vauxhall's manufacturing sites to the highest level of performance, after years of degradation and in line with the PACE! recovery plan.”

When Vauxhall announced the further job cuts in January, it said it would conduct a statutory 45-day workforce consultation and strive to minimise the impact of the proposed job cuts. It also said it was committed to keep making the Astra at Ellesmere Port.

PSA has said previously that manufacturing costs at Ellesmere were higher than other plants it owned.

Vauxhall employs about 4,500 people in the UK, with about 1,800 at Ellesmere Port. The company also has a factory at Luton, which makes vans.

In August last year, PSA became Europe's second-biggest carmaker after Volkswagen when it completed the purchase of Vauxhall and German brand Opel from General Motors.

Groupe PSA and BNP Paribas have announced the closing of their joint acquisition of the financial operations of Opel and Vauxhall.

A further 250 jobs will be cut by Vauxhall on top of the 400 jobs it announced in October to "accelerate the recovery of plant productivity".

Stephen Norman has been appointed managing director of Vauxhall Motors and Opel Ireland, succeeding Rory Harvey who has elected to leave the business.