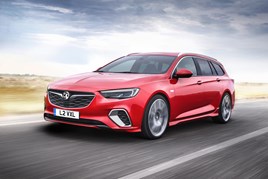 Vauxhall has laid out plans for a more “conservative” year in 2018 as the market faces challenges over economic uncertainty, Brexit and sustained attacks on diesel by Government and national media. It is also adjusting to life under PSA after the acquisition was completed in November.

Last year, Vauxhall lost its position as the UK’s second biggest manufacturer dropping to third in the sales table behind Volkswagen. It’s a far cry from the bullish ambitions of former managing director Duncan Aldred, who told the world’s media in 2013 that the company intended to “overtake Ford by 2016”.

James Taylor, Vauxhall fleet sales and remarketing director, who has always taken a more moderate line, described 2017 as a “perfect storm of events”, with deterioration in the exchange rate following Brexit, the general election and Vauxhall’s change of ownership.

“Our sales volumes were not where we envisaged them being,” he said. “However, two-thirds of our volume reduction in true fleet was a strategic withdrawal from the courtesy car sector. At the current exchange rate, it didn’t make sense to operate in some of these segments. We changed our offer so it didn’t drive volume.”

He intends to continue in a similar vein this year. “We are being more selective in where we place our cars and we will take a more conservative approach to the exchange rate. We are putting that into our numbers,” Taylor said.

Vauxhall also failed to capitalise on the opportunities offered by Mokka in a growing SUV sector. The positioning was wrong, which affected its fleet sales.

Insignia Grand Sport and Corsa had a strong start to the year, the former helped by the introduction of new trims and the 1.6-litre diesel Tourer estate towards the end of 2017. Crossland X also found an audience with user-choosers.

Consequently, Vauxhall enjoyed an 18% uplift in fleet in January, although this was offset by heavy losses in retail, resulting in a total brand reversal of almost 9%.

However, retail pressures will not force Vauxhall to pump more volume into short-term rental, said Taylor. He removed 12,000 units last year and plans to cut another 10,000 this year.

If he does, Vauxhall will drop behind Ford as the biggest contributor to the rental sector.

“Our focus is on profitable volume which is about improving our mix of business,” Taylor said.

“We are forecasting a slight reduction in true fleet with sales down in courtesy cars and public sector – the more competitive, and less profitable, end of the market. But this should be a good year for user-chooser wins and new business wins.”

Vauxhall has announced the prices for the Insignia GSi, the performance variant of Vauxhall’s flagship model.

A further 250 jobs will be cut by Vauxhall on top of the 400 jobs it announced in October to "accelerate the recovery of plant productivity".